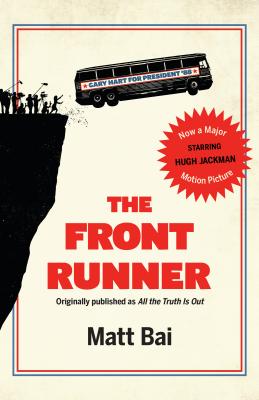 An NPR Best Book of the Year

In May 1987, Colorado Senator Gary Hart—a dashing, reform-minded Democrat—seemed a lock for the party’s presidential nomination and led George H. W. Bush by double digits in the polls. Then, in one tumultuous week, rumors of marital infidelity and a newspaper’s stakeout of Hart’s home resulted in a media frenzy the likes of which had never been seen before.

Through the spellbindingly reported story of the Senator’s fall from grace, Matt Bai, Yahoo News columnist and former chief political correspondent for The New York Times Magazine, shows the Hart affair to be far more than one man’s tragedy: rather, it marked a crucial turning point in the ethos of political media, and the new norms of life in the public eye. All the Truth Is Out is a tour de force portrait of the American way of politics at the highest level, one that changes our understanding of how we elect our presidents and how the bedrock of American values has shifted under our feet.

Matt Bai is the national political columnist for Yahoo! News. For more than a decade he was a political correspondent for the New York Times Magazine, where he covered three presidential campaigns. He is the author of The Argument: Billionaires, Bloggers, and the Battle to Remake Democratic Politics, named a Notable Book of 2007 by the New York Times and All the Truth is Out. He lives in Bethesda, Maryland. For more information about Matt Bai, visit mattbai.com.

“Perhaps you’re one of the many millions who believe something has gone sadly wrong in national politics. . . . If so, All the Truth Is Out is for you.”
—The Dallas Morning News

“A volume of insight and wisdom, an uncommon page-turner about the turning points we don’t recognize until we’re too far beyond them to turn back.”
—Minneapolis Star Tribune

“In buoyant, vivid prose . . . All the Truth Is Out gives the reader a visceral appreciation of how our political discourse has changed in the last two and a half decades, and how those changes reflect broader cultural and social shifts.”
—Michiko Kakutani, The New York Times

“An introspective book that is set in another era but offers insights into ours. . . . Bai says what is obvious—that the Donna Rice furor irreparably hurt Hart—but he also says what is less obvious, and very wise: that it hurt us all.”
—The Boston Globe

“A miniclassic of political journalism that will restart the debate of 1987.”
—Jack Shafer, The New York Times Book Review

“Compelling. . . . Bai’s superb book provokes many questions, and I gulped it down in a single sitting.”
—Ken Auletta, The New Yorker

“This book isn’t just for politicos. It is a must read for anyone interested in contemporary politics and media.”
—The Christian Science Monitor

“All the Truth Is Out offers a terrific portrait of how news gets made…It’s riveting, a slow-motion car crash . . . [with] shrewd observations on the miserable state of contemporary political journalism (and politicians). . . . The media, as Hart experienced, pick and choose raw material from an individual life and fashion an image that often bears only a slim resemblance to the human being behind it. What matters is not who someone really is or what he has done. What matters is the symbolic need he meets.”
—Salon

“Bai doesn’t just make an argument: He tells the juicy Hart story all over again, right down to the oil-stained alley in which reporters cornered the candidate and interrogated him about the blonde in his apartment. . . . Bai’s important call for perspective is a reminder to all of us in the press and the electorate to recognize the complexity of the human condition, whether we’re casting aside candidates because they wear a funny helmet in a tank or because they once committed adultery.”
—Slate

“Fast-moving [and] vivid. . . . This book will tell you a lot about what politics asks of and takes out of people, and about the highly imperfect ways in which we now assess ‘character’ and ‘substance’ when choosing our leaders.”
—The Atlantic

“You think you know it all: Donna Rice, Monkey Business, Hart taunting the press. You don’t. The combustible mix of new technology and politics was birthed in [the 1987] presidential campaign, and there was no turning back.”
—NPR

“A masterfully written account . . . this first-rate work of political journalism will fan embers long thought to have gone out.”
—Publishers Weekly, starred review

“Bai shows that he is [Richard Ben] Cramer’s worthy successor—his important cautionary tale will resonate with journalists and members of the media as well as with political players and readers of current history.”
—Library Journal, starred review

“In the tradition of his friend Richard Ben Cramer, Matt Bai astonishes us by delving deeply into a story and thus overturning our views about how the press should cover politics. This fascinating and deeply significant tale shows how the rules of American politics and journalism were upended for the worse by the frenzied coverage of Gary Hart’s personal life. The soot still darkens our political process.”
—Walter Isaacson, author of Steve Jobs

“What a tally of loss is to be found in this passionate and unsparing book about a turning point in modern America—an insider’s account, brilliantly told by one of America’s finest political journalists.”
—Lawrence Wright, author of The Looming Tower