The Encyclopedia of Animals: A Complete Visual Guide (Hardcover) 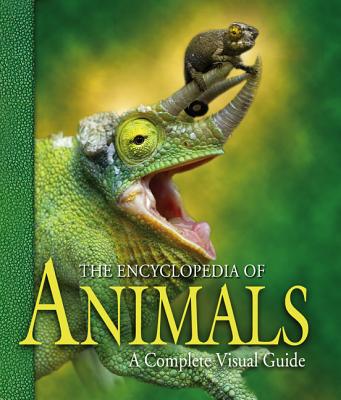 The Encyclopedia of Animals: A Complete Visual Guide (Hardcover)


Available to order! Usually Ships to Store in 3-5 Days.
The Encyclopedia of Animals is a lavishly illustrated, authoritative, and comprehensive exploration of the rich and intriguing world of animals. Written by an international team of specialists, spectacularly adorned with a gallery of more than 2,000 color illustrations, and supplemented with distribution maps, detailed and beautifully rendered diagrams, and some of the world's finest wildlife photographs, this volume will become the standard by which all others are measured. Each page is expertly laid out to enhance either browsing or in-depth study. Readers will find detailed coverage of all sorts of animals, including mammals, birds, reptiles, amphibians, fishes, and invertebrates.

The Encyclopedia includes an introductory overview of animal evolution, biology, behavior, classification, habitats, and current conservation issues. An extensive encyclopedic survey of the animals follows, with special attention given to endangered and vulnerable species. All information is completely up-to-date, with the most recent scientific and conservation data.

Elegant graphics put a broad selection of information at readers' fingertips, including classification information, scientific and common names, distribution maps for all animal groups, conservation panels that focus on threatened species, accurate and detailed anatomical drawings, and illustrations of multiple species. Each section is color coded for easy identification of animal groups. Feature pages explore topics of particular interest and provide insights into animal behavior. With its expansive scope, richly detailed information, and inviting design, this will be the ideal reference for a broad range of uses.

* Completely up-to-date, with the most recent scientific information and conservation data

* A gallery of more than 2,000 illustrations

* Authoritative text contributed by a team of international specialists

* Distribution maps for all animal groups

* Feature pages exploring topics of particular interest and providing insights into animal behavior
George McKay (mammals) is an independent consultant in conservation biology who lives in Sydney, Australia. He has contributed to Fauna of Australia and Zoological Catalogue of Australia. He is the editor of Encyclopedia of Biodiversity and Conservation. Fred Cooke (birds) was Chair of Wildlife Ecology at Simon Fraser University. He is President-Elect of the American Ornithologists Union and lives in Norfolk, England, where he is associated with the British Trust for Ornithology. Stephen Hutchinson (fish) is a Senior Fellow at the Southampton Oceanography Centre. Richard Vogt (reptiles and amphibians) is Curator of Herpetology and Professor at the National Institute for Amazon Research in Manaus, Amazonas, Brazil. Hugh Dingle (invertebrates) is Professor Emeritus at the University of California, Davis, where he was also Director of the Center for Animal Behavior.
“This book would be an ideal introduction to zoology for school and public libraries.”
— Living The Scientific Life (Scientist, Interrupted)