The Tao of Martha: My Year of Living; Or, Why I'm Never Getting All That Glitter Off of the Dog (Hardcover) 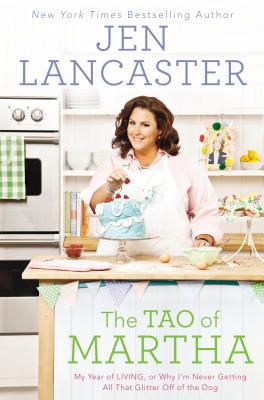 By Jen Lancaster
Email or call for price
Out of Print - Contact us to order used copies.

One would think that with Jen Lancaster's impressive list of bestselling self-improvement memoirs "Bitter Is the New Black"; "Bright Lights, Big Ass"; "Such a Pretty Fat"; "Pretty in Plaid"; "My Fair Lazy"; and "Jeneration X" that she would have it all together by now.
One would be wrong.
Jen's still a little rough around the edges. Suffice it to say, she's no Martha Stewart. And that is exactly why Jen is going to Martha up and live her life according to the advice of America's overachieving older sister the woman who turns lemons into lavender-infused lemonade.
By immersing herself in Martha's media empire, Jen will embark on a yearlong quest to take herself, her house, her husband (and maybe even her pets) to the next level from closet organization to craft making, from party planning to kitchen prep.
Maybe Jen can go four days without giving herself food poisoning if she follows Martha's dictates on proper storage....Maybe she can grow closer to her girlfriends by taking up their boring-ass hobbies like knitting and sewing. Maybe she can finally rid her workout clothes of meatball stains by using Martha's laundry tips. Maybe she can create a more meaningful anniversary celebration than just getting drunk in the pool with her husband....again. And maybe, just maybe, she ll discover that the key to happiness does, in fact, lie in Martha's perfectly arranged cupboards and artfully displayed charcuterie platters.
"Or maybe not.

Jen Lancaster is the "New York Times "bestselling author of eight books. She has appeared on "Today," "The Joy Behar Show," and NPR s "All Things Considered." She resides in the suburbs of Chicago with her husband and their ever-expanding menagerie of ill-behaved pets."

"Lancaster's as adept at fiction as she is at telling her own stories—no matter what she's writing, it's scathingly witty and lots of fun."—Publishers Weekly (starred review)

"Readers will find it easy to root for the frank and funny heroine of this winsome, whimsical tale. Lancaster's downright fun novel is chick lit at its best."—Booklist (starred review)

"In a whimsical twist on the Back to the Future scenario, a bully returns to her high school days to right some wrongs...Quantum physics was never funnier. A great read."—Kirkus (starred review)

IF YOU WERE HERE

“Jen Lancaster has the kind of scathing wit that makes you wish she was your best friend but thankful she’s not your new neighbor.”—New York Times Bestselling Author Carrie Ryan

“Hilarious...My Fair Lazy does not ‘suck it.’ It rocks it.”—Examiner.com

“Light and fun and full of pop-culture musings.”—Chicago Sun-Times

“Like that dreamy pair of heels that [is] somehow both comfy and chic…a hilarious tribute to her early fashion obsessions.”—People

SUCH A PRETTY FAT

“She’s like that friend who always says what you’re thinking—just 1,000 times funnier.” —People

BITTER IS THE NEW BLACK