Nate the Great and the Mushy Valentine (Paperback) 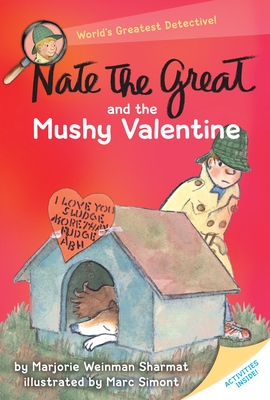 Nate the Great and the Mushy Valentine (Paperback)


Available to order! Usually Ships to Store in 3-5 Days.
Perfect for beginning readers, this timeless chapter book is a fun introduction to the detective mystery genre. And for Valentine's Day, kids can follow Nate as he unravels the problem, all the while learning about the importance of friendship--with people and dogs!

Nate the Great hates mushy stuff. Then he spies a big red paper heart taped to Sludge’s doghouse. Who left Nate’s dog a secret valentine? Nate will solve the case, and then there will be no more mushy stuff. At least that’s what he thinks. . . .

Check out the Fun Activities section in the back of the book!

“A most appealing choice.”—Booklist, Boxed Review
MARJORIE WEINMAN SHARMAT has written more than 130 books for children and young adults, as well as movie and TV novelizations. Her books have been translated into twenty-four languages. The award-winning Nate the Great series, hailed in Booklist as “groundbreaking,” has resulted in Nate’s real-world appearances in many New York Times crossword puzzles, sporting a milk mustache in magazines and posters, residing on more than 28 million boxes of Cheerios, and touring the country in musical theater. Marjorie Weinman Sharmat and her husband, Mitchell Sharmat, have also coauthored many books, including titles in both the Nate the Great and the Olivia Sharp series.

“Nate, Sludge, and all their friends have been delighting beginning readers for years.” —Kirkus Reviews

“They don’t come any cooler than Nate the Great.” —The Huffington Post