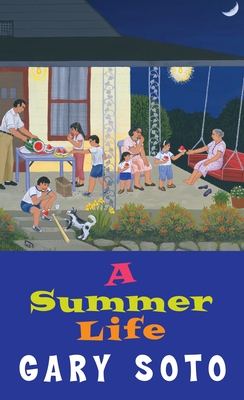 
Available to order! Usually Ships to Store in 3-5 Days.
Gary Soto writes that when he was five "what I knew best was at ground level." In this lively collection of short essays, Soto takes his reader to a ground-level perspective, resreating in vivid detail the sights, sounds, smells, and textures he knew growing up in his Fresno, California, neighborhood. The "things" of his boyhood tie it all together: his Buddha "splotched with gold," the taps of his shoes and the "engines of sparks that lived beneath my soles," his worn tennies smelling of "summer grass, asphalt, the moist sock breathing the defeat of basesall." The child's world is made up of small things--small, very important things.
Gary Soto has written six poetry collections, prose recollections, and several books of essays.  His first young adult short story collection, Baseball in April and Other Stories, has been one of the most widely discussed and reviewed books of 1990.  He is Associate Professor of Chicano Studies and English at the University of California, Berkeley.
“Deceptively simplistic and quietly powerful sketches from a gifted poet and storyteller.”—Booklist

“Soto the realist does not neglect his boyhood mischief, and his sly sense of humor is exercised throughout.”—Publishers Weekly