You're Saying It Wrong: A Pronunciation Guide to the 150 Most Commonly Mispronounced Words--and Their Tangled Histories of Misuse (Hardcover) 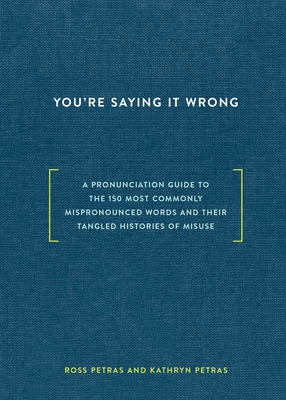 You're Saying It Wrong: A Pronunciation Guide to the 150 Most Commonly Mispronounced Words--and Their Tangled Histories of Misuse (Hardcover)


On Our Shelves Now
For word nerds and grammar geeks, a witty guide to the most commonly mispronounced words, along with their correct pronunciations and pithy forays into their fascinating etymologies and histories of use and misuse.

With wit and good humor, this handy little book not only saves us from sticky linguistic situations but also provides fascinating cocktail-party-ready anecdotes. Entries reveal how to pronounce boatswain like an old salt on the deck of a ship, trompe l'oeil like a bona fide art expert, and haricot vert like a foodie, while arming us with the knowledge of why certain words are correctly pronounced the "slangy" way (they came about before dictionaries), what stalks of grain have to do with pronunciation, and more. With bonus sidebars like "How to Sound like a Seasoned Traveler" and "How to Sound Cultured," readers will be able to speak about foreign foods and places, fashion, philosophy, and literature with authority.
ROSS PETRAS and KATHRYN PETRAS are the authors of the #1 best-selling page-a-day calendar The 365 Stupidest Things Ever Said (now in its 21st year with over 4.5 million copies sold), Wretched Writing, It Always Seems Impossible Until It's Done, The Anthology of Really Important Modern Poetry, and more. Their work has received the attention of personalities like David Brinkley and Howard Stern and media outlets including the New York Times, Chicago Tribune, Wall Street Journal, Playboy, Cosmopolitan, Washington Post, Huffington Post, and the London Times. They have appeared on hundreds of radio and TV shows including Good Morning America, CNN, and Fox and Friends.
". . . the latest book from Ross and Kathryn Petras, a brother-and-sister writing team. . . .[contains] instructions ostensibly designed to make pronunciation a forte. (It’s pronounced “fort,” by the way.) And designed, too, to spare you the particular strain of embarrassment that results when you learn that you have been pretentiously mispronouncing the name of your already-pretentious sparkling water. You’re Saying It Wrong acknowledges that most modern of problems: the fact that so many of us learn words not by hearing them, but by reading them."
-- The Atlantic

". . . the small tome packs 150 of the most irritating words American-English speakers fail to get right. From gourmet terms borrowed from French to colloquialisms born in the United States to the names of characters endemic to H. P. Lovecraft’s fictional universes (admit it, you’ve always wanted to know how to pronounce Cthulhu), they help readers master both the perplexing and perplexingly simple expressions that make ordering braised endive anxiety-inducing."
-- The Huffington Post

". . . The best way to consume this book is in a room full of people who are from different parts of the country and have good senses of humor. Ask them how they pronounce each word that doesn’t seem obvious. Let the frustration and laughter and discussion ensue."
-- The Awl