The Next American City: The Big Promise of Our Midsize Metros (Hardcover) 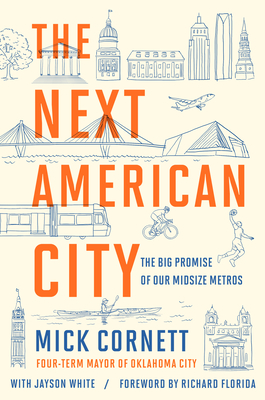 From four-term Oklahoma City Mayor Mick Cornett, a hopeful and illuminating look at the dynamic and inventive urban centers that will lead the United States in coming years.

Oklahoma City. Indianapolis. Charleston. Des Moines. What do these cities have in common? They are cities of modest size but outsized accomplishment, powered by a can-do spirit, valuing compromise over confrontation and progress over political victory. These are the cities leading America . . . and they're not waiting for Washington's help.

As mayor of one of America's most improved cities, Cornett used a bold, creative, and personal approach to orchestrate his city's renaissance. Once regarded as a forgettable city in "flyover country," Oklahoma City has become one of our nation's most dynamic places-and it is not alone. In this book, Cornett translates his city's success-and the success of cities like his-into a vision for the future of our country.

The Next American City is a story of civic engagement, inventive public policy, and smart urban design. It is a study of the changes re-shaping American urban life-and a blueprint for those to come.

Mick Cornett served four terms as Oklahoma City's longest-serving Mayor from 2004 to 2018. Midway through his time in office, Newsweek called him one of the five most innovative mayors in the country, and at the end of his Mayoralty he was named #25 on Fortune Magazine's "World's Greatest Leaders" list. London-based World Mayors listed him as the #2 mayor in the world, and Governing magazine named him the Public Official of the Year in 2010. Best known for helping Oklahoma City attract the NBA's Thunder franchise and putting Oklahoma City "on a diet" to lose a collective million pounds, Cornett also led the charge to pass MAPS 3, an innovative $800 million civic infrastructure investment in parks, urban transit, wellness centers, and downtown amenities that have dramatically reshaped Oklahoma City. He lives in Oklahoma City with his wife Terri, three sons and a growing family of sixth- and seventh-generation Oklahomans.

A nonfiction finalist for the 2019 Oklahoma Book Award

“Mick Cornett’s The Next American City calls on midsize metros to seize this moment and secure their future.”--The Wall Street Journal

“The Next American City is not a reference to just Oklahoma City, but a guide to how any community can aspire to such recognition.”--The Oklahoman

“At the heart of the book is optimism about what people and government can do when working together.”--Tulsa World

“…[Mick Cornett’s] achievements are real: OKC has undeniably risen in stature, and other ‘middle’ cities of the heartland have done the same. Valuable lessons for students of urban design and planning as well as local governance.”--Kirkus Reviews

“In The Next American City, Mayor Cornett lays out why many of us believe the future of America is in our mid-sized cities. This book is for anyone in politics or public policy interested in where we are headed and how we can get beyond the Washington gridlock that too often holds our country back."--Mitch Landrieu, former mayor of New Orleans, 2017-2018 president, United States Conference of Mayors

"The Next American City makes a serious point that we need to hear right now: innovation and bold ideas aren’t limited by geography or political affiliation. [Cornett] exposes the weaknesses in the cliché about two Americas — red/blue, urban/rural, coastal/heartland — by showing how cities across the country, led by mayors of both parties, are creating inclusive communities with good jobs and a high quality of life."--Eric Garcetti, mayor of Los Angeles

“Headlines from Washington dominate our social media pages and consume the nightly news, but Mayor Cornett points out the truth—that cities like Oklahoma City and Fort Worth, Texas, are leading the way for a brighter future in America. From innovation that augments fiscal responsibility to bold leadership that isn’t afraid to cross party lines, cities are providing the commonsense leadership that our citizens deserve.”
--Mayor Betsy Price, Fort Worth, Texas, Chairwoman Emeritus, Community Leaders of America

“As a mayor and a governor, I’ve seen cities in my state and across the region grow from sleepy Western towns jolted by booms and busts to economic engines attracting the country’s top employers. When people love where they live and they invest in it, there’s no telling what will come. Oklahoma City and places like it have a bright future ahead.”
—Governor John Hickenlooper, state of Colorado, former mayor of Denver (2003–2011)

"The Next American City provides an inspiring vision for those in America's fastest-growing places. If we are all very lucky, hundreds, maybe thousands will hear the call to action in this book. Our nation will be a better place for it."--Patrick McCrory, Former Governor of North Carolina, Four-term Mayor of Charlotte

“The biggest, boldest ideas for [a] life that really matters to people are rising up in places like Oklahoma City and those following in its wake.”—Anthony Williams, mayor of Washington, D.C. (1999–2007), and CEO, Federal City Council

"Mick Cornett's leadership in Oklahoma City, and the stories he tells in The Next American City, can help ambitious, visionary young athletes, artists, entrepreneurs and others find the ideas, and inspiration it takes to make their cities great. Across America, talent can bloom and grow right where it comes from—or in my case, right where it belongs."
--Nadia Comăneci, Olympic Gold Medalist

“The Next American City is essential reading for the next generationof city leaders in any party, from any city.”
—Stephen Goldsmith, Daniel Paul Professor of the Practice of Government, Director of the Innovations in American Government Program, Harvard Kennedy School of Government

“Cornett and White remind us that today’s struggling community was likely yesterday’s boom town, and more importantly, could be tomorrow’s thriving innovation hub.  The history of cities is one of constant change.  They provide practical and inspirational insights on the renaissance taking place in cities as small as Charlottesville and as big as New York, as these cities discover their potential to flourish as centers of innovation and entrepreneurship.”
--Professor Michael Lenox, Chief Strategy Officer, Darden School of Business

“Mick Cornett’s achievements in Oklahoma City are truly revolutionary. If you are a mayor—or simply care about your city—please read this book!”—Joe Riley, Charleston mayor (1975–2016) and founder, Mayors’ Institute on City Design

"Something new is happening—and The Next American City taps into this change in Middle America and what it means for creative humans from coast to coast.”
—Wayne Coyne, founder and front man, The Flaming Lips