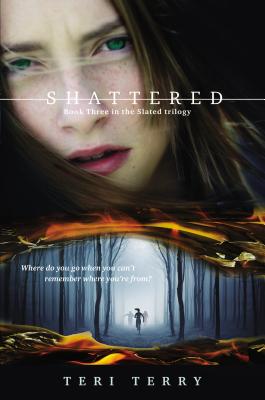 This is book number 3 in the Slated series.

Kyla is in danger from both the government Lorders who erased her memory and the terrorists who tried to use her. So now she’s on the run. Sporting a new identity and desperate to fill in the blank spaces of her life pre-Slating, Kyla heads to a remote mountain town to try to reunite with the birth mother she was kidnapped from as a child. There she is hoping all the pieces of her life will come together and she can finally take charge of her own future. But even in the idyllic wilderness and the heart of her original family, Kyla realizes there is no escape from the oppressive Lorders. Someone close to her may be one of them, and even more frighteningly, her birth mother has been keeping secrets of her own.

In this stunning series finale, Kyla finally finds out who she really is—and the road to this discovery, and to deciding who she wants to become, is full of dangerous twists and turns that will keep readers riveted.

Praise for the Slated trilogy:

“Even if you’re sick of teenage dystopias, this paranoid mind-wiping novel will thrill you.”—io9

“A refreshing change from the often overly naïve heroines of recent YA science fiction. . . . Stands out from the dystopian pack. . . . Readers will anxiously await sequels to come.”—The Bulletin of the Center for Children’s Books

“Terry’s world is remarkably like today’s. . . . The romance and politics keep suspense ratcheted up. . . . Intriguing—readers will be on tenterhooks for the next one.”—Kirkus Reviews

“A suspenseful page-turner with a highly sympathetic and strong female protagonist. A perverse sense of claustrophobic dread grows throughout the novel. . . . Will have readers waiting eagerly for a sequel.”—Booklist

Teri Terry (www.teriterry.com), Canadian by birth, has lived in France, Canada, Australia and England, at more addresses than she can count. She’s been a scientist, lawyer, optometrist and business manager, and worked in high schools and libraries, with writing and stories always humming along in the background. Because moving constantly has kept her on the outside looking in much of her life, she has an obsession with characters who don’t belong or find themselves in unfamiliar places. Slated was her first novel, and she recently completed a research MA on the depiction of terrorism in young-adult literature. She lives in Buckinghamshire, United Kingdom.

“Exciting final book in the ‘Slated’ trilogy . . . provides some satisfying resolutions to both character development and the mysteries that infuse the previous installments. . . . The story is gripping and suspenseful. . . . Readers who have enjoyed the first two installments will not be disappointed by the dramatic conclusion.” — School Library Journal

“Terry’s dystopian trilogy comes to a close, after Fractured, with lots of adrenalin-inducing action, thought-provoking situations, and questions finally answered. . . . Terry’s writing is as tight, compelling, and descriptive as ever.” — Booklist