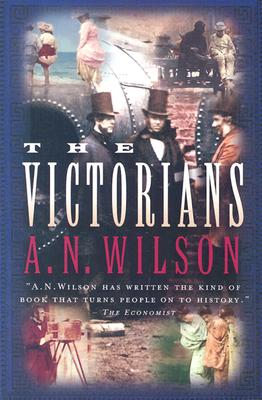 A dramatic, revisionist panorama of an age whose material triumphs and spiritual crises prefigure our own.

The nineteenth century saw greater changes than any previous era: in the ways nations and societies were organized, in scientific knowledge, and in nonreligious intellectual development. The crucial players in this drama were the British, who invented both capitalism and imperialism and were incomparably the richest, most important investors in the developing world. In this sense, England's position has strong resemblances to America's in the late twentieth century.

As one of our most accomplished biographers and novelists, A. N. Wilson has a keen eye for a good story, and in this spectacular work he singles out those writers, statesmen, scientists, philosophers, and soldiers whose lives illuminate so grand and revolutionary a history: Darwin, Marx, Gladstone, Christina Rossetti, Gordon, Cardinal Newman, George Eliot, Kipling. Wilson's accomplishment in this book is to explain through these signature lives how Victorian England started a revolution that still hasn't ended.

A. N. Wilson is the author of the acclaimed biographies Tolstoy, C. S. Lewis, Jesus, and Paul; God's Funeral, and several celebrated novels. He lives in London.
A vivid portrait of Victorian Britain and Britons...the kind of book that turns people on to history.
— The Economist

The Victorians finds Wilson writing at the height of his powers.