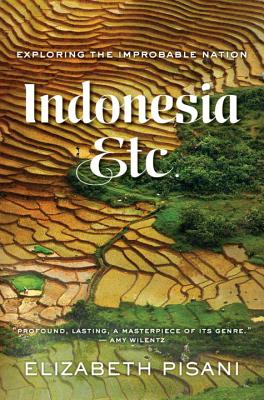 An entertaining and thought-provoking portrait of Indonesia: a rich, dynamic, and often maddening nation awash with contradictions.

Jakarta tweets more than any other city on earth, but 80 million Indonesians live without electricity and many of its communities still share in ritual sacrifices. Declaring independence in 1945, Indonesia said it would “work out the details of the transfer of power etc. as soon as possible.” With over 300 ethnic groups spread across 13,500 islands, the world’s fourth most populous nation has been working on that “etc.” ever since. Bewitched by Indonesia for twenty-five years, Elizabeth Pisani recently traveled 26,000 miles around the archipelago in search of the links that bind this impossibly disparate nation. Fearless and funny, Pisani shares her deck space with pigs and cows, bunks down in a sulfurous volcano, and takes tea with a corpse. Along the way, she observes Big Men with child brides, debates corruption and cannibalism, and ponders “sticky” traditions that cannot be erased.

Elizabeth Pisani has lived in Indonesia at various times over the past twenty-five years, originally as a journalist and later as an HIV epidemiologist. The author of The Wisdom of Whores and Indonesia Etc., she is based in London.
This perfect chronicle not only depicts [Indonesia’s] bewildering multiplicity of languages, ethnicities, religions and political beliefs but also answers such questions as why there is no Indonesian diaspora and whether Islamic militancy poses a deep threat to the country.
— Wall Street Journal

Intrepid and passionate, Elizabeth Pisani takes readers on board a hilarious series of jury-rigged forms of transportation, from bustling, insane Djakarta to the smallest and remotest islands and country villages of Indonesia. By the end, exhausted, dusty, thirsty, and laughing, we feel we know this idiosyncratic country in all its moving complexity. Profound, lasting, a masterpiece of its genre—and so much fun!
— Amy Wilentz, author of The Rainy Season and Farewell, Fred Voodoo

Pisani not only travels a dizzying amalgam of the 13,500 islands that comprise Indonesia, but she also follows their history from the seventh century forward with fluidity and ease. There are few other books—or authors—to attempt such a daunting task.
— Eliza Griswold, author of The Tenth Parallel

A clear-eyed and smart look at a rising Asian giant that has defied all conventional wisdom… A good read not only for those interested in Indonesia, but everyone who is thinking about how other developing countries too could rise above their internal problems to be improbable success stories.
— Vali Nasr, author of The Dispensable Nation, and The Rise of Islamic Capitalism

It's hard to imagine the energy, tenacity and intimate background knowledge needed to write this book. Luckily, Elizabeth Pisani has these qualities in droves. Read it, even if you don't think you're interested in Indonesia—it’s inspiring on so many levels, from the boundless curiosity and warmth of the author to the country’s spectacular miracle of geo-political confidence and experimentation.
— Emma Larkin, author of Everything is Broken and Secret Histories

One of the year’s most engrossing and edifying travelogues… Pisani’s book will stir up wonder and wanderlust in even the most experienced travelers.
— Jim Gladstone - Passport

As close as we may come to a feet-on-the-street, impassioned and amusing understanding of the fourth-largest-populated country in the world.
— Bruce Jacobs - Shelf Awareness

Pisani is a force of nature… A treasure of a volume.
— Simon Winchester - Wall Street Journal

Exuberant and wise… Pisani is an exceptionally resourceful observer of the ongoing battle to define Indonesia.
— Pankj Mishra - The New Yorker