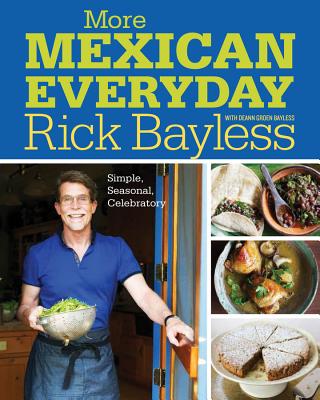 By Rick Bayless, Deann Groen Bayless (With), David Tamarkin (With)

The follow-up to Rick Bayless's best-selling Mexican Everyday features a dozen "master-class" recipes you'll want to learn by heart, more than 30 innovative vegetable dishes, Rick's secret weapon flavorings to weave into your favorite dishes, and many other brand-new creations from his kitchen.

Rick Bayless transformed America's understanding of Mexican cuisine with his Mexican Everyday. Now, Rick returns with an all-new collection of uniquely flavorful recipes, each one the product of his evolution as a chef and champion of local, seasonal ingredients.

More Mexican Everyday teaches home cooks how to build tasty meals with a few ingredients in a short amount of time. Cooking Mexican couldn’t be easier, or more delicious. Rick generously reveals the secrets of his dishes—the salsas and seasonings, mojos and adobos he employs again and again to impart soul-satisfying flavor. He explains fully the classic techniques that create so many much-beloved Mexican meals, from tacos and enchiladas to pozole and mole. Home cooks under his guidance will be led confidently to making these their go-to recipes night after night.

"Everyday" Mexican also means simplicity, so Rick dedicates individual chapters to illustrate skillful use of the slow cooker and the rice cooker. Also included are a special variation of the classic chicken-and-rice pairing, Arroz con Pollo, with an herby green seasoning, and an addictive roasted tomatillo salsa that’s flavored with the same red chile seasoning brushed on his lush Grilled Red-Chile Ribs.

Rick loves to highlight the use of seasonal, diverse vegetables. The heart of this cookbook is devoted to modern creations that range from a Jícama-Beet Salad inspired by Mexico’s classic Christmas Eve salad to a sweet-and-tangy butternut braise. Rick's flexible imagination also transforms breakfast into a meal for any hour. His Open-Face Red Chile–Chard Omelet is as great for Wednesday night dinner as it is for Sunday brunch. Not to be forgotten is Rick's array of show-stopping desserts, among them Mexican Chocolate–Pumpkin Seed Cake and Fresh Fruit with 24-Hour Cajeta and Bitter Chocolate. In all his recipes, Rick carefully guides you through every step, suggesting ways to invent, adapt, and simplify without sacrificing flavor.

More Mexican Everyday invites you into Rick's creative kitchen to enliven the way you cook and eat with friends and family.

Rick Bayless has done more to bring authentic Mexican cooking to America than any other cookbook author and chef. He is a six-time James Beard Award winner and the host of Mexico: One Plate at a Time. He is the chef-owner of Frontera Grill, Topolobampo, Xoco, and Tortas Frontera. Rick won the first season of Top Chef Masters and is the recipient of Mexico’s Order of the Aztec Eagle, the highest honor awarded to foreigners. His cookbooks include Fiesta at Rick’s, Mexican Everyday, and More Mexican Everyday.

Deann Groen Bayless has co-authored nine cookbooks with her husband Rick Bayless and is the co-owner of a growing family of Mexican restaurants, including Frontera Grill, Topolobampo, Xoco, and Tortas Frontera. She is a former president of Women Chefs and Restaurants, an organization that advocates for women in the restaurant industry, and the executive producer of the PBS television show Mexico, One Plate At A Time.
I love these recipes. Rick Bayless has made the American family table taste like Mexico. Carne Asada Dinner, anyone?
— Bobby Flay, chef, Gato New York

Chef Bayless has been an endless source of inspiration and knowledge on the subjects of Mexican cuisine and living life to the fullest…Read More Mexican Everyday, be inspired and then go cook from it. You will never find another writer as thoughtful as this one.

Rick introduced the U.S. to real Mexican cooking. He has put Mexican food on the map, and his way of teaching has made us not just want to go home and cook it every day but also learn as much as we can about this intensely unique cuisine.
— Marcus Samuelsson, James Beard Award–winning chef, owner of Red Rooster Harlem and Streetbird Rotisserie, author of Marcus Off Duty: The Recipes I Cook at Home