The Vanishing Neighbor: The Transformation of American Community (Hardcover) 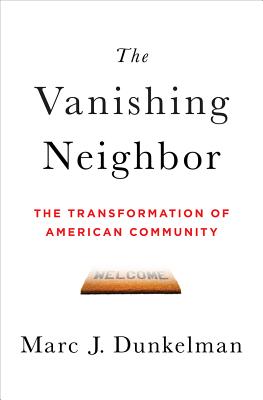 A sweeping new look at the unheralded transformation that is eroding the foundations of American exceptionalism.

Americans today find themselves mired in an era of uncertainty and frustration. The nation's safety net is pulling apart under its own weight; political compromise is viewed as a form of defeat; and our faith in the enduring concept of American exceptionalism appears increasingly outdated.

But the American Age may not be ending. In The Vanishing Neighbor, Marc J. Dunkelman identifies an epochal shift in the structure of American life—a shift unnoticed by many. Routines that once put doctors and lawyers in touch with grocers and plumbers—interactions that encouraged debate and cultivated compromise—have changed dramatically since the postwar era. Both technology and the new routines of everyday life connect tight-knit circles and expand the breadth of our social landscapes, but they've sapped the commonplace, incidental interactions that for centuries have built local communities and fostered healthy debate.

The disappearance of these once-central relationships—between people who are familiar but not close, or friendly but not intimate—lies at the root of America's economic woes and political gridlock. The institutions that were erected to support what Tocqueville called the "township"—that unique locus of the power of citizens—are failing because they haven't yet been molded to the realities of the new American community.

It's time we moved beyond the debate over whether the changes being made to American life are good or bad and focus instead on understanding the tradeoffs. Our cities are less racially segregated than in decades past, but we’ve become less cognizant of what's happening in the lives of people from different economic backgrounds, education levels, or age groups. Familiar divisions have been replaced by cross-cutting networks—with profound effects for the way we resolve conflicts, spur innovation, and care for those in need.

The good news is that the very transformation at the heart of our current anxiety holds the promise of more hope and prosperity than would have been possible under the old order. The Vanishing Neighbor argues persuasively that to win the future we need to adapt yesterday’s institutions to the realities of the twenty-first-century American community.

Marc J. Dunkelman is a Research Fellow at Brown University’s A. Alfred Taubman Center for Public Policy and American Institutions and a Senior Fellow at the Clinton Foundation. His writing has appeared in the Washington Post, the Wall Street Journal, Politico, and National Affairs, among other publications. He lives in Providence, Rhode Island.

Marc Dunkelman gets it. In The Vanishing Neighbor, he shows how the traditional web of relationships that makes up American life is undergoing fundamental change, why it matters, and what we need to do about it.

A highly ambitious, wide-ranging book that offers important new insights into why the bonds of community have unraveled in America in the past generation.
— Alan Ehrenhalt, author of The Great Inversion

In The Vanishing Neighbor, Marc Dunkelman conducts us insightfully through the work of astute sociologists and other observers of American social life, from the time in the 1950s when they described a conformist and confident society to the confused and more uncertain period of today. He focuses on one significant change: the transformation of the American 'township,' a defining characteristic of American society since Tocqueville first identified it, into something quite different. As Dunkelman ably shows, rapid economic change, the digital revolution, and other factors have fundamentally altered our social life, our political life, and our ability to solve the problems of a rapidly changing society.

The Vanishing Neighbor is an urgent, challenging, strongly reasoned argument about the health of American society. Marc Dunkelman speaks directly to the communication gap between our local communities and the governments that serve them. How we bridge that gap—as working people, as political leaders, and as neighbors—will determine the care we provide to our loved ones and the opportunities we leave our children for years to come.

After a panoramic view of how the United States has changed in so many ways, Marc Dunkelman argues that Americans are left with a sense of isolation from neighbors nearby: we keep 'inner-ring' relationships with family and close friends plus 'outer-ring' with Facebook friends we see infrequently, but we have lost middle-ring relationships with families down the street and a barber around the corner. Institutions, Dunkelman believes, must adapt to these new realities, nourishing a fresh sense of community. This is an insightful call for remembering what Tocqueville found best about America.
— David Gergen, codirector of the Center for Public Leadership and professor of public service at Harvard Kennedy School and senior political analyst, CNN

A meditation on the evaporation of American exceptionalism… thought-provoking [and] evenhanded.
— Kirkus Reviews

A rich and accessible diagnosis of contemporary mores and discontents.
— Publishers Weekly