FDR and the American Crisis (Hardcover) 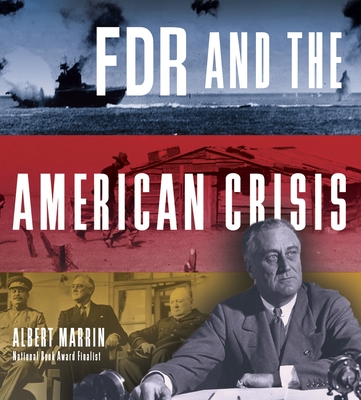 FDR and the American Crisis (Hardcover)


Hard to Find. This book may be unable to order.
The definitive biography of president Franklin Delano Roosevelt for young adult readers, from National Book Award finalist Albert Marrin, is a must-have for anyone searching for President's Day reading.

Brought up in a privileged family, Franklin Delano Roosevelt had every opportunity in front of him. As a young man, he found a path in politics and quickly began to move into the public eye. That ascent seemed impossible when he contracted polio and lost the use of his legs. But with a will of steel he fought the disease—and public perception of his disability—to become president of the United States of America.

FDR used that same will to guide his country through a crippling depression and a horrendous world war. He understood Adolf Hitler, and what it would take to stop him, before almost any other world leader did. But to accomplish his greater goals, he made difficult choices that sometimes compromised the ideals of fairness and justice.

FDR is one of America’s most intriguing presidents, lionized by some and villainized by others. National Book Award finalist Albert Marrin explores the life of a fascinating, complex man, who was ultimately one of the greatest leaders our country has known.
Albert Marrin is the author of numerous nonfiction books for young readers, including Flesh and Blood So Cheap: The Triangle Fire and Its Legacy, which was a National Book Award finalist, as well as Black Gold: The Story of Oil in Our Lives, A Volcano Beneath the Snow: John Brown’s War Against Slavery, and Thomas Paine: Crusader for Liberty.

His many honors include the Washington Children’s Book Guild and Washington Post Nonfiction Award for an “outstanding lifetime contribution that has enriched the field of children’s literature,” the James Madison Book Award for lifetime achievement, and the National Endowment for the Humanities Medal, awarded by President George W. Bush.
"This well-researched and highly detailed examination of FDR and his presidency provides insight for readers generations removed from the events."
—Kirkus Reviews, starred review