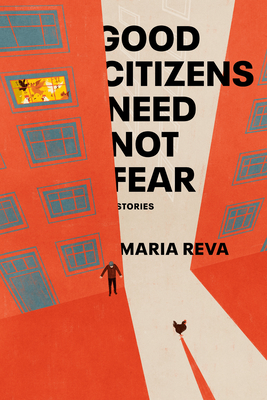 In this short book you will be introduced to a collection of characters who will stay with you for a long time after you put down this book, as you explore how it is to exist in a country that is in the midst of huge cultural, political, and social change. Despite this somewhat heavy setting, these tales are not hard going. Instead they are very amusing, and in parts quite touching, while also featuring at times the absolutely absurd.

You’ll meet along this journey a woman who copies banned Western records (LPs) onto ‘borrowed’ X-rays. There is a young man who thinks he is being recruited by the higher echelons of the party, as he believes his parents once were. And tying these and the other characters together is Zaya, who becomes rather attached to a priestly mummy and whose CV by the end is fabulous!

"These immersive linked stories grapple with Ukrainian history through the waning years of the USSR and birth pangs of democracy...Reva's characters spark off the page as they confront a brutal bureaucratic past with the only tool they possess--hope."--O, The Oprah Magazine

A brilliant and bitingly funny collection of stories united around a single crumbling apartment building in Ukraine.

A bureaucratic glitch omits an entire building, along with its residents, from municipal records. So begins Reva's "darkly hilarious" (Anthony Doerr) intertwined narratives, nine stories that span the chaotic years leading up to and immediately following the fall of the Soviet Union. But even as the benighted denizens of 1933 Ivansk Street weather the official neglect of the increasingly powerless authorities, they devise ingenious ways to survive.

In "Bone Music," an agoraphobic recluse survives by selling contraband LPs, mapping the vinyl grooves of illegal Western records into stolen X-ray film. A delusional secret service agent in "Letter of Apology" becomes convinced he's being covertly recruited to guard Lenin's tomb, just as his parents, not seen since he was a small child, supposedly were. Weaving the narratives together is the unforgettable, chameleon-like Zaya: a cleft-lipped orphan in "Little Rabbit," a beauty-pageant crasher in "Miss USSR," a sadist-for-hire to the Eastern Bloc's newly minted oligarchs in "Homecoming."

Good Citizens Need Not Fear tacks from moments of intense paranoia to surprising tenderness and back again, exploring what it is to be an individual amid the roiling forces of history. Inspired by her and her family's own experiences in Ukraine, Reva brings the black absurdism of early Shteyngart and the sly interconnectedness of Anthony Marra's Tsar of Love and Techno to a "bang-on brilliant" (Miriam Toews) collection that is "fearless and thrilling" (Bret Anthony Johnston), and as clever as it is heartfelt.

MARIA REVA was born in Ukraine and grew up in Canada. She holds an MFA from the Michener Center at the University of Texas. Her fiction has appeared in The Atlantic, McSweeney's, Best American Short Stories, and elsewhere, and has won a National Magazine Award. She also works as an opera librettist.

"Maria Reva’s enthralling debut of interlinked short stories achieves the double effect of timelessness and timeliness. The emotional impact of this book is cumulative. This is partly down to her mastery of the form: the stories are connected by a unity of place, time and relationship. More importantly, they are brought to life by Reva’s handling of darkness and light."
—The Guardian

"One of the leading post-Soviet writers of her generation while breaking through the limitations of the term itself...[Reva] proves to be an incredible builder of worlds."
—The Atlantic

"Creative, poignant, and darkly hilarious, Good Citizens Need Not Fear is full of relevant questions about resistance, corruption, and maintaining dignity against the dehumanizing power of the State. This is an outstanding first book."
—Anthony Doerr, author of All the Light We Cannot See

"Luminous. These stories speak with humour yet real emotion of the heaviness of totalitarian systems and show how the light of our humanity still shines through. Terrific stuff."
—Yann Martel, author of Man Booker Prize-winning Life of Pi

"Dazzling...With their big, delightful dollops of surrealism and absurdity, these stories conjure up from the old Soviet-era Ukraine a world that feels, with its hall-of-mirrors twists and torques, uncannily—alarmingly!—on point and up-to-date. Good Citizens Need Not Fear marks the beginning of what is sure to be a long, strong career for the brilliant Maria Reva."
—Ben Fountain, author of Billy Lynn’s Long Halftime Walk

"Everything about this book is astonishing—its breadth and depth, its wit and originality, its inventiveness and intelligence and, maybe most surprising of all, its great big heart.  We’ve been waiting for a writer as fearless and thrilling as Maria Reva, and Good Citizens Need Not Fear confirms that she’s arriving exactly when we need her most."
—Bret Anthony Johnston, author of Remember Me Like This

“Maria Reva is a miracle writer: how else to explain how dark and suffused with light these stories are, how genuinely hilarious and very serious, how entertaining and thought provoking? You've never read anything like them, and together they make an incredible, strange, & deeply exciting book.”
—Elizabeth McCracken, author of Bowlaway

“I have never read anything like these radiant stories. They are true originals— funny, devastating, and containing a weird, wild energy. These citizens, living in the literally collapsing buildings of Ukraine, will not be crushed or silenced. They have something urgent to say about where we are today.”
—Deb Olin Unferth, author of Wait Till You See Me Dance

“[A] hilarious, absurdist debut collection…Reva delights in the strange situations caused by political dysfunction, while offering surprising notes of tenderness as ordinary people learn to get by. The riotous set pieces and intelligent gaze make this an auspicious debut.”
—Publishers Weekly (starred review)

“Darkly funny...Readers won’t know if they should be laughing or crying, and yet these stories are also filled with such warmth and tenderness.”
—Fredericksburg Free-Lance Star