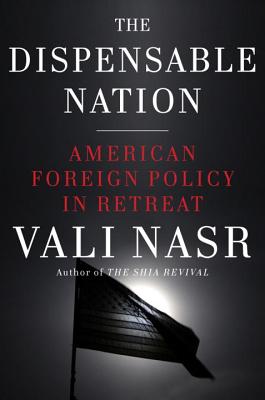 In a brilliant and revealing book destined to drive debate about the future of American power, Vali Nasr questions America's dangerous choice to engage less and matter less in the world.
Vali Nasr, author of the groundbreaking "The Shia Revival," worked closely with Hillary Clinton at the State Department on Afghan and Pakistani affairs. In "The Dispensable Nation," he takes us behind the scenes to show how Secretary Clinton and her ally, Ambassador Richard Holbrooke, were thwarted in their efforts to guide an ambitious policy in South Asia and the Middle East. Instead, four years of presidential leadership and billions of dollars of U.S. spending failed to advance democracy and development, producing mainly rage at the United States for its perceived indifference to the fate of the region.
After taking office in 2009, the Obama administration had an opportunity to fundamentally reshape American foreign policy, Nasr argues, but its fear of political backlash and the specter of terrorism drove it to pursue the same questionable strategies as its predecessor. Meanwhile, the true economic threats to U.S. power, China and Russia, were quietly expanding their influence in places where America has long held sway.
Nasr makes a compelling case that behind specific flawed decisions lurked a desire by the White House to pivot away from the complex problems of the Muslim world. Drawing on his unrivaled expertise in Middle East affairs and firsthand experience in diplomacy, Nasr demonstrates why turning our backs is dangerous and, what's more, sells short American power. The United States has secured stability, promoted prosperity, and built democracy in region after region since the end of the Second World War, he reminds us, and "The Dispensable Nation" offers a striking vision of what it can achieve when it reclaims its bold leadership in the world.

VALI NASR is Dean of the Johns Hopkins School of Advanced International Studies and the bestselling author of "The Shia Revival" and "Forces of Fortune." From 2009 to 2011, he served as Senior Advisor to Ambassador Richard Holbrooke. He is a columnist for "Bloomberg View" and lives in Washington, D.C.

Praise for The Dispensable Nation:

“In The Dispensable Nation, Nasr delivers a devastating portrait of a first-term foreign policy that shunned the tough choices of real diplomacy, often descended into pettiness, and was controlled ‘by a small cabal of relatively inexperienced White House advisers.’… The Dispensable Nation constitutes important reading as John Kerry moves into his new job as secretary of state. It nails the drift away from the art of diplomacy — with its painful give-and-take — toward a U.S. foreign policy driven by the Pentagon, intelligence agencies and short-term political calculus. It holds the president to account for his zigzags from Kabul to Jerusalem….The Dispensable Nation is a brave book. Its core message is: Diplomacy is tough and carries a price, but the price is higher when it is abandoned.”
—Roger Cohen, New York Times

“The Dispensable Nation is an indispensable book. Taking us into the secretive world of high-level American foreign policy, Vali Nasr shares astounding, previously unrevealed details about the Obama administration's dealings with Afghanistan, Pakistan and Iran. But Nasr doesn't just spill secrets—he also charts a path forward, advancing an insightful prescription for how the United States can regain its lost influence. This provocative story is a must-read for anyone who cares about America's role in the world.”
—Rajiv Chandrasekaran, author of Little America and Imperial Life in the Emerald City.

“An original, powerful, and provocative critique of American foreign policy under President Obama.”
—George Packer, author of The Assassins' Gate: America in Iraq

"Vali Nasr was in the room during key moments of the Obama administration's first two years as it faced some of its most important foreign policy challenges. His portrayal of strategic confusion inside Obama's White House is devastating and persuasive. Nasr writes with the dispassion of one of the United States' leading experts on the Middle East and South Asia and with the insider knowledge he gained as a senior adviser to Richard Holbrooke, the legendary diplomat. Nasr asserts that the Obama White House didn't really believe in diplomacy in its dealings with the Afghans and Pakistanis and he makes his case with great cogency and clarity in this indispensable book."
—Peter Bergen, author of Manhunt: The Ten-Year Search for bin Laden, from 9/11 to Abbottabad

"Vali Nasr is the George Kennan of U.S. policy in the Middle East. A renowned scholar but also a practitioner and insider who served two years in the Obama administration, Nasr delivers a sharp, sober, fast-paced and absolutely riveting critique of President Obama’s policies in the Middle East and Afghanistan."
—Robert Kagan, Senior Fellow, Brookings Institution and author of The World America Made

“The Dispensable Nation is an important wake-up call by a thoughtful, astute and deeply knowledgeable scholar and policymaker. Anyone interested in the Middle East, China, or the future of American power should read it immediately and think hard about its message.”
—Anne-Marie Slaughter, Bert G. Kerstetter ’66 University Professor of Politics and International Affairs at Princeton University and former Director of Policy Planning, U.S. Department of State, 2009-2011

“An impressive tour d’horizon which includes a personally frank eulogy to Richard Holbrooke’s failed efforts to shape U.S. policy in Afghanistan, revealing insights into White House vs. State Department collisions over U.S. strategy, and a sweeping review of the escalating geopolitical challenges the U.S. needs to address more intelligently in the Middle East, the Far East, and especially Iran. Gutsy, intriguing, and challenging.”
—Zbigniew Brzezinski

“Vali Nasr is without peer in explaining how and why political order is crumbling across the Middle East, and how and why China may reap the spoils. Along the way, he lays out in never-before-told, granular detail why President Obama's first term was such a disappointment regarding foreign policy.”
—Robert D. Kaplan, chief geopolitical analyst, Stratfor, and author of The Revenge of Geography