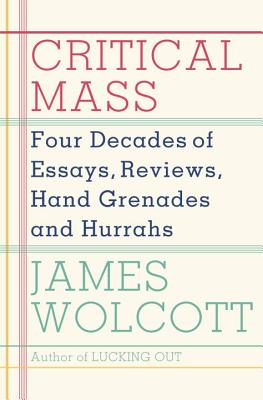 A career-spanning collection of critical essays and cultural journalism from one of the most acute, entertaining, and sometimes acerbic (but in a good way) critics of our time
From his early-seventies dispatches as a fledgling critic for "The Village Voice" on rock n roll, comedy, movies, and television to the literary criticism of the eighties and nineties that made him both feared and famous to his must-read reports on the cultural weather for "Vanity Fair," James Wolcott has had a career as a freelance critic and a literary intellectual nearly unique in our time. This collection features the best of Wolcott in whatever guise connoisseur, intrepid reporter, memoirist, and necessary naysayer he has chosen to take on.
Included in this collection is O.K. Corral Revisited, a fresh take on the famed Norman Mailer Gore Vidal dustup on "The Dick Cavett Show" that launched Wolcott from his Maryland college to New York City (via bus) to begin his brilliant career. His prescient review of Patti Smith's legendary first gig at CBGB leads off a suite of eyewitness and insider accounts of the rise of punk rock, while another set of pieces considers the vast cultural influence of the enigmatic Johnny Carson and the scramble of his late-night successors to inherit the swivel throne. There are warm tributes to such diverse figures as Michael Mann, Sam Peckinpah, Lester Bangs, and Philip Larkin and masterly summings-up of the departed giants of American literature John Updike, William Styron, John Cheever, and Mailer and Vidal. Included as well are some legendary takedowns that have entered into the literary lore of our time.
" Critical Mass" is a treasure trove of sparkling, spiky prose and a fascinating portrait of our lives and cultural times over the past decades. In an age where a great deal of back scratching and softball pitching pass for criticism, James Wolcott's fearless essays and reviews offer a bracing taste of the real critical thing.

JAMES WOLCOTT is the long-time culture critic and blogger for "Vanity Fair." He is most recently the author of the critically acclaimed memoir "Lucking Out," and his essays, features, and reviews have appeared in "The New Republic," "The New York Times Book Review," "The Atlantic," "The New Yorker," "The New York Review of Books," and numerous other publications. He is also the author of a novel, "The Catsitters," and a work of political commentary, "Attack Poodles and Other Media Mutants." He lives in New York with his wife, the writer Laura Jacobs.

"Epically rewarding... Mr. Wolcott is among the last of the great, garrulous, generalist critics, equally at home writing about TV, movies, literature, music, comedy clubs, you name it... Critical Mass scoops up the best of his material from Vanity Fair, for which he has written since 1983, as well as pieces from outlets that range from The Village Voice, where he got his start in the 1970s, to The New Yorker, Texas Monthly and The London Review of Books, among others. It’s a vacuum-packed anthology of tight arguments and shrewd observations... Few writers can nail a performance, or an artist’s body of work, with more ecstatic economy."
—The New York Times

"Mr. Wolcott’s cultural criticism is ecstatic and alive, and this big box of his best stuff is absurdly entertaining — a rolling series of intellectual lightning strikes. Pound for pound, sentence for sentence, for a certain kind of reader, this is the book of the year."
- Dwight Garner's 10 Favorite Books of 2013, The New York Times

“For the past forty years critic James Wolcott has been a cerebral antidote to the dullness contaminating our cultural pages… There’s also tremendous value in [his] sharp-eyed seeing…in doing what critics have been doing from Aristotle to Walter Pater to Mary McCarthy to John Updike: enhancing, augmenting art and culture by helping to explain the complexity and dynamism in their DNA. Some of Wolcott’s analysis forever tweaks how you see, hear, and read.”
—The Daily Beast

"Forthright and fair-minded, but ferocious in disdain, with the sly, smart voice of someone in the know but never caught up in the moment, this collection...preserves an unforgettable of 'that New York speciality—the well-informed wise guy.'"
—Publishers Weekly

"An eclectic collection that reasserts the author's reputation as one of America's most perceptive, candid and human critics."
—Kirkus Reviews

"Wolcott is a wickedly cunning, agile writer with a special talent for quick-sketch characterizations... Critical Mass is the perfect bedside-table book because its short entries promise pleasure from even the briefest dips into its pages."
—Richmond Times-Dispatch