House of the Red Fish (Prisoners of the Empire Series) (Paperback) 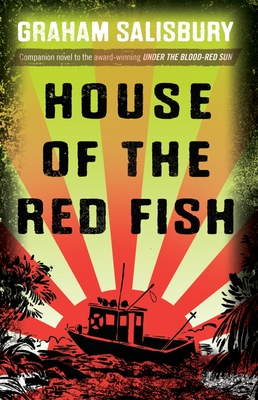 House of the Red Fish (Prisoners of the Empire Series) (Paperback)


This book may be unavailable. Please call us for price & availability: (316) 682-1181.
1943, one year after the end of Under the Blood-Red Sun, Tomi’s Papa and Grandpa are still under arrest, and the paradise of Hawaii now lives in fear—waiting for another attack, while trying to recover from Pearl Harbor. As a Japanese American, Tomi and his family have new enemies everywhere, vigilantes who suspect all Japanese. Tomi finds hope in his goal of raising Papa’s fishing boat, sunk in the canal by the Army on the day of the attack. To Tomi, raising Papa’s boat is a sign of faith that Papa and Grandpa will return. It’s an impossible task, but Tomi is determined. For just as he now has new enemies, his struggle to raise the boat brings unexpected allies and friends.
Graham Salisbury is the author of several novels. He lives in Portland, Oregon.
“Salisbury paints the tropical setting with vivid details. He writes with balance of the ways in which war touches people, creating characters with fully realized motivations. It is not necessary to have read the first book, as the author seamlessly brings his audience up to date.”–School Library Journal

“Many readers, even those who don’t enjoy historical fiction, will like the portrayal of the work and the male camaraderie.”–Booklist