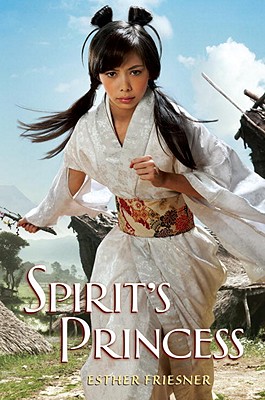 
Hard to Find. This book may be unable to order.
"Himiko is brave and bold. I love her!" --Tamora Pierce, New York Times bestselling author

Himiko shouldn't have a care in the world. As the only daughter of the most powerful man in the Matsu clan, she has her every need catered to. But Himiko isn't like other girls. She would much rather follow her brothers' path and become a hunter--something clan tradition and her strict father will never allow. And Himiko has a secret: she can commune with the spirit world. The clan's shaman has seen visions of Himiko's future as clan leader and decides to train her in secret. Suddenly Himiko's path doesn’t look pampered—it looks dangerous.

Readers who love strong girl-centric adventures are eating up Esther Friesner's Princesses of Myth books, finding the mash-up of historical fiction and fantasy adventure irresistible!
Nebula Award winner ESTHER FRIESNER is the author of more than 30 novels and over 150 short stories, including the story "Thunderbolt" in Random House's Young Warriors anthology, which lead to the creation of Nobody's Princess and Nobody's Prize. She is also the editor of seven popular anthologies. Her works have been published around the world. Educated at Vassar College and Yale University, where she taught for a number of years, Ms. Friesner is also a poet, a playwright, and once wrote an advice column, "Ask Auntie Esther." She is married, is the mother of two, harbors cats, and lives in Connecticut. You can visit Esther at: www.sff.net/people/e.friesner.
VOYA, February 2012:
"Set in third-century Japan, Spirit’s Princess chronicles Himiko’s early years and her struggle to find her path. Beautifully written and heartfelt, Himiko’s tale defines a new kind of princess, one for whom strength comes from believing in herself and trusting in the love she has for her people...[R]eaders familiar with the Princesses of Myth series will know to expect that this is only the first volume of Himiko’s story, the initial developing of a strong and unique protagonist. Filled with expertly crafted description and heartbreaking depth, the text weaves history and myth to create a truly memorable heroine."