Love Is the Higher Law (Paperback) 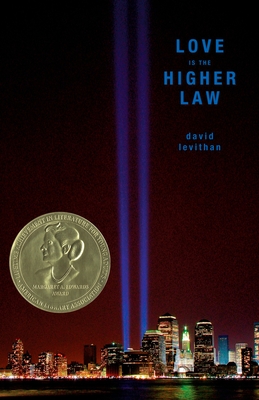 Love Is the Higher Law (Paperback)

“Love Is the Higher Law looks at 9/11, and the days, months, and years following it, through the eyes, hearts, and minds of three New York teenagers. Levithan's story will be eye-opening for today's younger teens -- some of whom may have little memory of the actual attack -- and for older teens and adults it will help to make it clear that, however one reacted to the tragedy, you were not alone. A powerful book sure to touch all who read it.”
— Kat Goddard, The Bookloft, Great Barrington, MA

Bestselling author David Levithan (Every Day; Boy Meets Boy; Will Grayson, Will Grayson with John Green) treats the tragic events of September 11th with care and compassion in this novel of loss and grief, but also of hope and redemption.

The lives of three teens—Claire, Jasper, and Peter—are altered forever on September 11, 2001. Claire, a high school junior, has to get to her younger brother in his classroom. Jasper, a college sophomore from Brooklyn, wakes to his parents’ frantic calls from Korea, wondering if he’s okay. Peter, a classmate of Claire’s, has to make his way back to school as everything happens around him.

Here are three teens whose intertwining lives are reshaped by this catastrophic event. As each gets to know the other, their moments become wound around each other’s in a way that leads to new understandings, new friendships, and new levels of awareness for the world around them and the people close by.

David Levithan has written a novel of loss and grief, but also one of hope and redemption aAs histhe characters slowly learn to move forward in their lives, despite being changed forever, one rule remains: love is indeed the higher law.

A MARGARET A. EDWARDS AWARD WINNER
David Levithan is a children’s book editor in New York City. He lives in Hoboken, New Jersey.