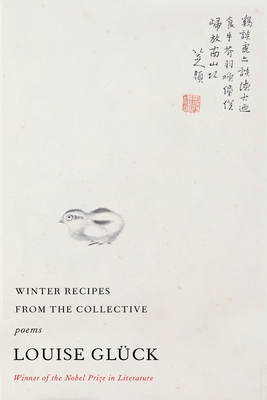 WINNER OF THE NOBEL PRIZE IN LITERATURE

Louise Glück’s thirteenth book is among her most haunting. Here as in the Wild Iris there is a chorus, but the speakers are entirely human, simultaneously spectral and ancient. Winter Recipes from the Collective is chamber music, an invitation into that privileged realm small enough for the individual instrument to make itself heard, dolente, its line sustained, carried, and then taken up by the next instrument, spirited, animoso, while at the same time being large enough to contain a whole lifetime, the inconceivable gifts and losses of old age, the little princesses rattling in the back of a car, an abandoned passport, the ingredients of an invigorating winter sandwich, a sister’s death, the joyful presence of the sun, its brightness measured by the darkness it casts.

Louise Glück is the author of two collections of essays and more than a dozen books of poems. Her many awards include the 2020 Nobel Prize in Literature, the 2015 National Humanities Medal, the 1993 Pulitzer Prize for The Wild Iris, the 2014 National Book Award for Faithful and Virtuous Night, the 1985 National Book Critics Circle Award for The Triumph of Achilles, the 2001 Bollingen Prize, the 2012 Los Angeles Times Book Prize for Poems 1962–2012, and the 2008 Wallace Stevens Award from the Academy of American Poets. She teaches at Yale University and Stanford University and lives in Cambridge, Massachusetts.

“[Glück is] a fastidiously exact truth-teller; her lucid poems pretend to a plainness that’s really the simplicity of something more fully worked out than the rest of us can manage . . . [Winter Recipes from the Collective] examines close relationships without the sweetener of correct sentiment, recording the universal stages of human life through a woman’s experience. We’re back in the stylised, half-dreamed Glück landscapes that are rural equivalents of an Edward Hopper painting, and back with her astonishing poetry, as the world goes by, / All the worlds, each more beautiful than the last.” —Fiona Sampson, The Guardian (UK)


“[Winter Recipes from the Collective] mines the variegated beats of human existence for something shared and intimate . . . beckoning the reader to enter in conversation with one of the great poets of our times.” —Kevin Lozano, Vulture