The Disordered Mind: What Unusual Brains Tell Us About Ourselves (Paperback) 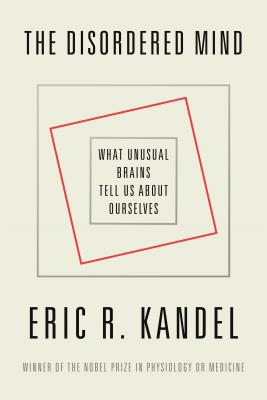 The Disordered Mind: What Unusual Brains Tell Us About Ourselves (Paperback)

Eric R. Kandel, the winner of the Nobel Prize in Physiology or Medicine for his foundational research into memory storage in the brain, is one of the pioneers of modern brain science. His work continues to shape our understanding of how learning and memory work and to break down age-old barriers between the sciences and the arts.

In his seminal new book, The Disordered Mind, Kandel draws on a lifetime of pathbreaking research and the work of many other leading neuroscientists to take us on an unusual tour of the brain. He confronts one of the most difficult questions we face: How does our mind, our individual sense of self, emerge from the physical matter of the brain? The brain’s 86 billion neurons communicate with one another through very precise connections. But sometimes those connections are disrupted. The brain processes that give rise to our mind can become disordered, resulting in diseases such as autism, depression, schizophrenia, Parkinson’s, addiction, and post-traumatic stress disorder. While these disruptions bring great suffering, they can also reveal the mysteries of how the brain produces our most fundamental experiences and capabilities—the very nature of what it means to be human. Studies of autism illuminate the neurological foundations of our social instincts; research into depression offers important insights on emotions and the integrity of the self; and paradigm-shifting work on addiction has led to a new understanding of the relationship between pleasure and willpower.

By studying disruptions to typical brain functioning and exploring their potential treatments, we will deepen our understanding of thought, feeling, behavior, memory, and creativity. Only then can we grapple with the big question of how billions of neurons generate consciousness itself.

Eric R. Kandel is the University Professor and Fred Kavli Professor at Columbia University and a Senior Investigator at the Howard Hughes Medical Institute. The recipient of the 2000 Nobel Prize in Physiology or Medicine for his studies of learning and memory, he is the author of In Search of Memory, a memoir that won a Los Angeles Times Book Prize; The Age of Insight: The Quest to Understand the Unconscious in Art, Mind, and Brain, from Vienna 1900 to the Present, which won the Bruno Kreisky Award in Literature, Austria’s highest literary award; and Reductionism in Art and Science: Bridging the Two Cultures, a book about the New York School of abstract art. He is also the coauthor of Principles of Neural Science, the standard textbook in the field.

"Kandel is an astute reader and a reflective observer . . . Neuroscience comes alive in Kandel’s study through the personal and imaginative ruminations of disordered minds . . . Kandel asks his reader to confront the anecdotal and inexplicable and think hard about what it means." —Stephen T. Casper, Science

"Eric Kandel is one of the giants of 20th- and 21st-century neuroscience . . . [The Disordered Mind] is both easy to read and informative . . . I recommend it to behavioral neurologists and neuropsychiatrists, both for their own edification and for seeing what their more intelligent patients are reading." —Howard S. Kirshner, Vanderbilt University Department of Neurology, Cognitive and Behavioral Neurology

"Highly accessible . . . Kandel’s deep compassion for people is also evident, as when he discusses how understanding the biological basis for mental disorders might take them out of the realm of legal culpability. The result of his work is an easily comprehended, meticulous synthesis of current research into the biological grounding of the human mind." —Publishers Weekly (starred review)

"[Kandel's discoveries] have truly changed our understanding of brain function." —Citation for the Nobel Prize in Physiology or Medicine

"[Eric Kandel is] one of the preeminent neuroscientists in the world." —Sue Halpern, The New York Review of Books