Bulletproof Vest: The Ballad of an Outlaw and His Daughter (Hardcover) 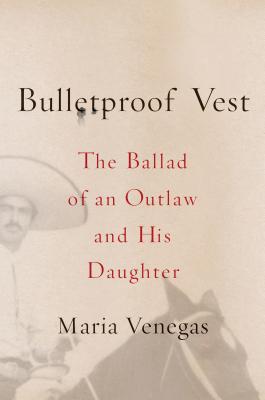 After a fourteen-year estrangement, Maria Venegas returns to Mexico from the United States to visit her father, who is living in the old hacienda where both he and she were born. While spending the following summers and holidays together, herding cattle and fixing barbed-wire fences, he begins sharing stories with her, tales of a dramatic life filled with both intense love and brutal violence-from the final conversations he had with his own father, to his extradition from the United States for murder, to his mother's pride after he shot a man for the first time at the age of twelve.
Written in spare, gripping prose, Bulletproof Vest is Venegas's reckoning with her father's difficult legacy. Moving between Mexico and New York, between past and present, Venegas traces her own life and her father's as, over time, a new closeness and understanding develops between them. Bulletproof Vest opens with a harrowing ambush on Venegas's father while he's driving near his home in Mexico. He survives the assault-but years later the federales will find him dead near the very same curve, and his daughter will be left with not only the stories she inherited from him but also a better understanding of the violent undercurrent that shaped her father's life as well as her own.

Maria Venegas has written for The New York Times Book Review, and her short stories have appeared in Granta, The Guardian, and Ploughshares. She received her MFA from Hunter College, where she also taught creative writing. She's currently a mentor at Still Waters in a Storm, a reading and writing sanctuary for children in Bushwick. She lives in New York City.

Praise for Bulletproof Vest“Maria Venegas beautifully charts the landscape of her father’s absence. By mapping his internal exile, she finds a way to their shared home, one known best by heart.” —Adrian Nicole LeBlanc, author of Random Family“Maria Venegas is a transfixing writer. Her voice is tough, vulnerable, humorous, insightful and always rousingly alive. Whether writing about Chicago or Mexico, she possesses an extraordinary eye and feeling for place, and her characters are vivid expressions of those places. American readers have rarely encountered a depiction of Mexican lives so true, unsentimental, and moving as in this emotionally complex story of an Americanized young woman and her outlaw father who lives by the hard violent codes of Mexico profundo.” —Francisco Goldman, author of Say Her Name

“This is a contemporary corrido—a ballad of America, a love song to Mexico, and an intertwined family history, all brilliantly realized in sharp, precise, poetic prose.” —Colum McCann, author of the National Book Award-winning Let the Great World Spin