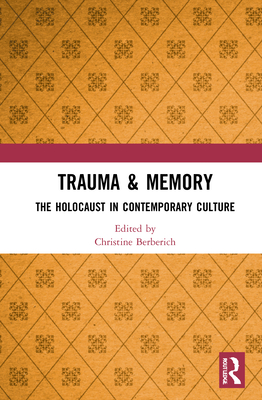 Over the past decades, the memory of the Holocaust has not only become a common cultural consciousness but also a cultural property shared by people all over the world. This collection brings together academics, critics and creative practitioners from the fields of Holocaust Studies, Literature, History, Media Studies, Creative Writing and German Studies to discuss contemporary trends in Holocaust commemoration and representation in literature, film, TV, the entertainment industry and social media.

The essays in this trans-disciplinary collection debate how contemporary culture engages with the legacy of the Holocaust now that, 75 years on from the end of the Second World War, the number of actual survivors is dwindling. It engages with ongoing cultural debates in Holocaust Studies that have seen a development from, largely, testimonial presentations of the Holocaust to more fictional narratives both in literature and film. In addition to a number of chapters focusing in particular on literary trends in Holocaust representation, the collection also assesses other forms of cultural production surrounding the Holocaust, ranging from recent official memorialisation in Germany to Holocaust presentation in film, computer games and social media. The collection also highlights the contributions by creative practitioners such as writers and performers who use drama and the traditional art of storytelling in order to keep memories alive and pass them on to new generations.

The chapters in this book were originally published as a special issue of Holocaust Studies: A Journal of Culture and History.

Christine Berberich is Reader in Literature at the University of Portsmouth, UK. She has published widely in the field of national identity construction, especially Englishness, and in twentieth-century and contemporary literature. She is the author of The Image of the English Gentleman in Twentieth-Century Literature: Englishness & Nostalgia (2007), co-editor of These Englands: Conversations on National Identity (2011), Land & Identity: Theory, Memory, Practice (2012) and Affective Landscapes in Literature, Art & Everyday Life (2015), and editor of The Bloomsbury Introduction to Popular Fiction (2014). She is currently editing a collection on Brexit and the migrant experience, entitled Brexit and the Migrant Voice, as well as writing a monograph tentatively entitled Nazi Noir and a public interest book on P.G. Wodehouse and the Nazi Internment Camp at Tost.