The Unwanted: Stories of the Syrian Refugees (Paperback) 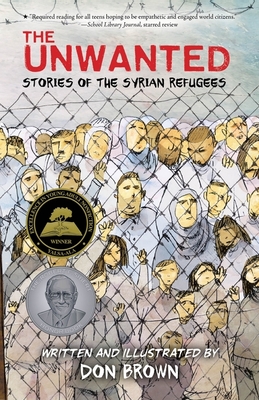 The Unwanted: Stories of the Syrian Refugees (Paperback)

In the tradition of two-time Sibert Honor winner Don Brown’s critically acclaimed full-color nonfiction graphic novels The Great American Dust Bowl and Drowned City, The Unwanted is a timely and eye-opening exploration of the ongoing Syrian refugee crisis, exposing the harsh realities of living in, and trying to escape, a war zone.


Starting in 2011, refugees flood out of war-torn Syria in Exodus-like proportions. The surprising flood of victims overwhelms neighboring countries, and chaos follows. Resentment in host nations heightens as disruption and the cost of aid grows. By 2017, many want to turn their backs on the victims. The refugees are the unwanted.

Don Brown depicts moments of both heartbreaking horror and hope in the ongoing Syrian refugee crisis. Shining a light on the stories of the survivors, The Unwanted is a testament to the courage and resilience of the refugees and a call to action for all those who read.

Don Brown is the YALSA excellence in nonfiction and Sibert Honor award-winning author and illustrator of many nonfiction graphic novels for teens and picture book biographies. He has been widely praised for his resonant storytelling and his delicate watercolor paintings that evoke the excitement, humor, pain, and joy of lives lived with passion. School Library Journal has called him "a current pacesetter who has put the finishing touches on the standards for storyographies." He lives in New York with his family.