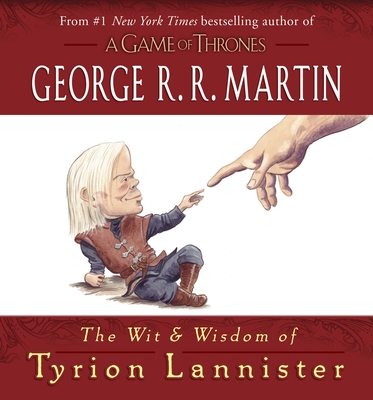 The perfect gift for fans of George R. R. Martin’s A Song of Ice and Fire novels and HBO’s Game of Thrones: a collection of wicked one-liners from the incomparable Imp of Casterly Rock, fully illustrated by Jonty Clark!

“My mind is my weapon. My brother has his sword, King Robert has his warhammer, and I have my mind . . . and a mind needs books as a sword needs a whetstone if it is to keep its edge.”

The jealous masses of the Seven Kingdoms may call him Halfman, but none have ever accused Tyrion Lannister of being a halfwit. His golden tongue has saved his skin slightly more often than it has landed him in mortal peril. Now, this special illustrated volume preserves his most essential knowledge for future generations, featuring time-tested guidance on such varied subjects as . . .

The art of persuasion
“The best lies are seasoned with a bit of truth.”

Fine dining
“A little honest loathing can be refreshing, like a tart wine after too much sweet.”

The fair sex
“The young ones smell much better, but the old ones know more tricks.”

Royal politics
“Crowns do queer things to the heads beneath them.”

Common ailments
“A sword through the bowels. A sure cure for constipation.”

At once charming, insightful, and ruthlessly irreverent, The Wit & Wisdom of Tyrion Lannister is short on pretense and overflowing with finely crafted gems—just like the man himself.

George R. R. Martin is the #1 New York Times bestselling author of many novels, including the acclaimed series A Song of Ice and Fire—A Game of Thrones, A Clash of Kings, A Storm of Swords, A Feast for Crows, and A Dance with Dragons—as well as Tuf Voyaging, Fevre Dream, The Armageddon Rag, Dying of the Light, Windhaven (with Lisa Tuttle), and Dreamsongs Volumes I and II. He is also the creator of The Lands of Ice and Fire, a collection of maps from A Song of Ice and Fire featuring original artwork from illustrator and cartographer Jonathan Roberts. As a writer-producer, Martin has worked on The Twilight Zone, Beauty and the Beast, and various feature films and pilots that were never made. He lives with the lovely Parris in Santa Fe, New Mexico.

Jonty Clark has been a freelance illustrator since 1997—mainly for editorial, but also for books, museums, and advertising. His clients include BBC History, BBC Music and BBC Countryfile Magazines, Radio Times, The Times, Financial Times, Telegraph, Natural History Museum, and Kumala Wines.