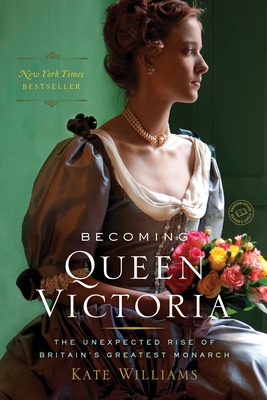 “Kate Williams has perfected the art of historical biography. Her pacy writing is underpinned by the most impeccable scholarship.”—Alison Weir

In 1819, a girl was born to the fourth son of King George III. No one could have expected such an unassuming, overprotected girl to be an effective ruler—yet Queen Victoria would become one of the most powerful monarchs in history.

Writing with novelistic flair and historical precision, Kate Williams reveals a vibrant woman in the prime of her life, while chronicling the byzantine machinations that continued even after the crown was placed on her head. Upon hearing that she had inherited the throne, eighteen-year-old Victoria banished her overambitious mother from the room, a simple yet resolute move that would set the tone for her reign. The queen clashed constantly not only with her mother and her mother’s adviser, the Irish adventurer John Conroy, but with her ministers and even her beloved Prince Albert—all of whom attempted to seize control from her.

Williams lays bare the passions that swirled around the throne—the court secrets, the sexual repression, and the endless intrigue. The result is a grand tale of a woman whose destiny began long before she was born and whose legacy lives on.

“Sparkling, engaging.”—Open Letters Monthly
Kate Williams studied for her B.A. at Oxford University and went on to earn an M.A. from the University of London and a D.Phil. in history from Oxford. A lecturer and TV consultant in addition to being CNN’s royal historian, she has hosted several documentaries on British television and appears regularly on both American and British networks. Williams is the New York Times bestselling author of three biographies—Ambition and Desire: The Dangerous Life of Josephine Bonaparte, England’s Mistress: The Infamous Life of Emma Hamilton, and Becoming Queen Victoria: The Unexpected Rise of Britain’s Greatest Monarch—as well as a novel, The Pleasures of Men. Her articles and essays have been published in a wide range of books and journals. Kate Williams lives in London.
“Kate Williams has excelled herself. One is engaged from the very first line. She has perfected the art of historical biography. Her pacy writing is underpinned by the most impeccable scholarship.”—Alison Weir, author of Lady in the Tower

“The amazing untold story of Victoria before she was queen . . . Kate Williams reveals a passionate young woman beloved of her future subjects but at war with her family.”—London Sunday Telegraph

“Becoming Queen Victoria showcases an outstanding talent from which we can expect much more.” —Spectator