Field Notes for Food Adventure: Recipes and Stories from the Woods to the Ocean (Hardcover) 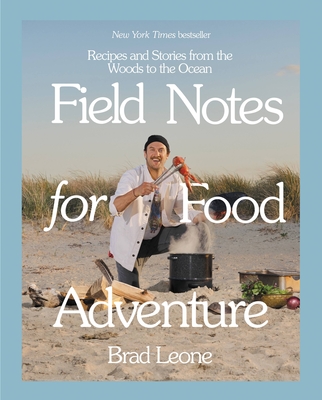 Field Notes for Food Adventure: Recipes and Stories from the Woods to the Ocean (Hardcover)


Available to order! Usually Ships to Store in 3-5 Days.
NEW YORK TIMES BESTSELLER • A FOOD52 BEST COOKBOOK OF THE YEAR • Join Brad Leone, star of Bon Appétit's hit YouTube series It's Alive, for a year of cooking adventures, tall tales, and fun with fire and fermentation in more than 80 ingenious recipes

Come along with Brad Leone as he explores forests, fields, rivers, and the ocean in the hunt for great food and good times. These pages are Brad’s field notes from a year of adventures in the Northeast, getting out into nature to discover its bounty, and capturing memorable ideas for making delicious magic at home anytime.

He taps maple trees to make syrup, and shows how to use it in surprising ways. He forages for ramps and mushrooms, and preserves their flavors for seasons to come. He celebrates the glory of tomatoes along with undersung fruits of the sea like squid and seaweed. Inspiration comes from hikes into the woods, trips to the dock, and cooking poolside in the dead of summer. And every dish has a signature Brad Leone approach—whether that’s in Sous Vide Mountain Ribs or Spicy Smoked Tomato Chicken, Sumac Lemonade or Fermented Bloody Marys, Cold Root Salad, Marinated Beans, or just a few shakes of a Chile Hot Sauce that’s dead simple to make.

This is a book about experimentation, adventure, fermentation, fire, and having fun while you’re cooking. And hey, you might just learn a thing or two. Let’s get going!
Brad Leone is a chef and online video star known for his Shorty Award-nominated web series with Bon Appetit, “It's Alive.” Before joining Bon Appetit as a dishwasher and working his way up to test kitchen manager, he was a professional carpenter and attended culinary school. Born and raised in New Jersey, he now resides in coastal Connecticut with his wife and sons. Field Notes for Food Adventure is his first book.
"Part cookbook and part ode to nature--specifically, that of the East Coast--Leone's book celebrates the fun and food found in the wild...Pictures are bountiful and will make readers long for a night under the stars, or maybe just some lamb chops. A breezy paean to respecting and connecting with nature through food."—Booklist

"anyone who’s seen the man stick his arm in a catfish’s mouth for the sake of YouTube needs this book faster than you can say “wourder.” You’ll read every word in Brad’s voice, which comes free of charge."—Bon Appetit

"Most of the action in Brad Leone's new cookbook, Field Notes for Food Adventure takes place outside the confines of the kitchen walls — a creative direction that is likely welcome after over a year of rolling pandemic lockdowns and stay-in-place orders... It's also a meditation on seasonality and how it impacts the way we eat."—Salon