Sword in the Stars: A Once & Future Novel (Paperback) 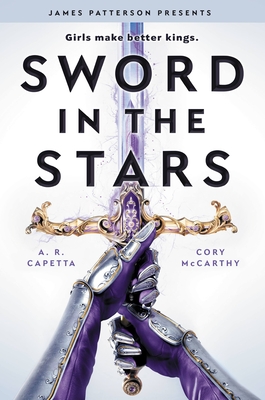 Sword in the Stars: A Once & Future Novel (Paperback)

By Cory McCarthy, A. R. Capetta


Available to order! Usually Ships to Store in 3-5 Days.
In this epic sequel to Once & Future, Ari and her Rainbow knights must pull off a Holy Grail heist thousands of years in the past -- without destroying their own destinies.

Ari Helix may have won her battle against the tyrannical Mercer corporation, but the larger war has just begun. Ari and her cursed wizard Merlin must travel back in time to the unenlightened Middle Ages and steal the King Arthur's Grail -- the very definition of impossible. It's imperative that the time travelers not skew the timeline and alter the course of history. Coming face to face with the original Arthurian legend could produce a ripple effect that changes everything. Somehow Merlin forgot that the past can be even more dangerous than the future....
Cory McCarthy (they/he) and A. R. Capetta (all pronouns) are the acclaimed bestselling authors of books for young people. Highlights include: the coauthored Once & Future, an ALA Rainbow List selection and finalist for the New England Book Award; A. R.’s queer genre titles Echo After Echo,The Lost Coast, and The Brilliant Death duology; Cory’s cinematic novels Breaking Sky, Now a Major Motion Picture, and You Were Here. The coauthors met while earning MFAs at Vermont College of Fine Arts, and soon after fell in love. During the release party for Once & Future at their local indie bookstore, they became engaged and were married shortly thereafter. They are riotously happy.
Praise for ONCE & FUTURE

* "All hail this worthier-than-ever, fresh, and affirming reincarnation of the legendary king and her round table of knights which dazzles with heroic flair, humor, and suspense."—Kirkus Reviews, STARRED REVIEW

"Fun and fearless, this story romps right across the galaxy and into your heart."—Amie Kaufman, New York Times bestselling author of Illuminae

"Once & Future is an utterly delightful romp, full of witty voice, imaginative adventures, and deeply lovable characters. It kept me up into the wee hours of the morning. I couldn't put it down!"—Katherine Locke, author of The Girl with the Red Balloon (2018 Sydney Taylor Honor Book)

"Once & Future is a sizzling, bold exploration of gender, power, and revolution. Its dynamic and diverse cast will inspire and delight readers. I loved every second!"—Jessica Khoury, author of The Forbidden Wish

"A rip-roaring, no-holds-barred, gloriously queer reinvention of Arthurian legend."—Malinda Lo, author of Ash and A Line in the Dark