Gorilla and the Bird: A Memoir of Madness and a Mother's Love (Paperback) 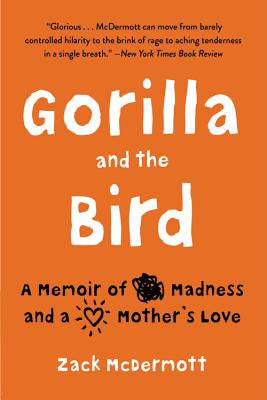 With accessibility, humor, and brutal honesty, Zack McDermott's memoir about being bipolar is essential reading now. The way mental health is dealt with in America leaves those afflicted marginalized and un-treated. I suspect this book will draw others with someone in their lives with the same condition as Zack to speak out, heal, and move to a better acceptance of the situation they find themselves in. Because of Zack's experience as a Public Defender he sees the condition from all sides. Through love, good doctors, and persistence, he can live with his Bi-Polar disorder. I will share this book with every one I know. Zack's book is an appreciation of the strong between a mother and a son; a story of rising to one's potential; a portrait of how the justice system deals with the poor, and how illness affects a whole family. I finished this book in one sitting, then started it again.

"Glorious...one of the best memoirs I've read in years...a tragicomic gem about family, class, race, justice, and the spectacular weirdness of Wichita. [McDermott] can move from barely controlled hilarity to the brink of rage to aching tenderness in a single breath." -- Marya Hornbacher, New York Times Book Review

Zack McDermott, a 26-year-old Brooklyn public defender, woke up one morning convinced he was being filmed, Truman Show-style, as part of an audition for a TV pilot. Every passerby was an actor; every car would magically stop for him; everything he saw was a cue from "The Producer" to help inspire the performance of a lifetime. After a manic spree around Manhattan, Zack, who is bipolar, was arrested on a subway platform and admitted to Bellevue Hospital.

So begins the story of Zack's freefall into psychosis and his desperate, poignant, often hilarious struggle to claw his way back to sanity. It's a journey that will take him from New York City back to his Kansas roots and to the one person who might be able to save him, his tough, big-hearted Midwestern mother, nicknamed the Bird, whose fierce and steadfast love is the light in Zack's dark world.

Before his odyssey is over, Zack will be tackled by guards in mental wards, run naked through cornfields, receive secret messages from the TV, befriend a former Navy Seal and his talking stuffed monkey, and see the Virgin Mary in the whorls of his own back hair. But with the Bird's help, he just might have a shot at pulling through, starting over, and maybe even meeting a partner who can love him back, bipolar and all.

Introducing an electrifying new voice, Gorilla and the Bird is a raw and unforgettable account of a young man's unraveling and the relationship that saves him.

Zack McDermott has worked as a public defender for The Legal Aid Society of New York. His work has appeared in the New York Times, This American Life, Morning Edition, and Gawker, among other places. He lives in New York and LA.

"A funny, finely observed and
surprisingly touching depiction of what it feels like to lose your mind. By
allowing us to witness his lowest and most delusional moments, and the slow and
tentative process of returning to the world, Zack McDermott provides a gripping
portrait of a very real human battle too often ignored and misunderstood. I am
better for reading this book."

"Zack McDermott's portrait of a mind under assault from bi-polar illness is both fascinating and heart-breaking to observe, and he takes us into his experience with riveting intensity. But McDermott's real achievement is capturing the moving determination and steadfast love of the mother who saves him, the remarkable Bird who breaks the loneliness, quiets the fear and gives him a home worth returning to. I was so moved by this book and these people."
—George Hodgman, New York Times bestselling author of Bettyville

"A poignant memoir...[McDermott's] book asks us to
destigmatize mental illness by familiarizing us intimately with the issue."
—Los Angeles Review of Books

"McDermott brings a vivid and unsettling degree
of intimacy to his descriptions of mania's onset. . . His work as a public defender grows out of
a deep sense of empathy for the stigmatized and marginalized that's evident on
every page. He uses that empathy to construct a deeply compassionate portrait
of his mother - a resilient woman whose love helps ground him in the real, even
in moments when his reality is at its most friable."

"A startlingly moving memoir of mother and son, structural injustice and inflammable mental illness. Gorilla and the Bird is as piss-cuttin' a pieta as anyone has any right to hope for. And Zack McDermott -- guy's a fleet, funny, unsentimental storyteller who manages that rare thing: He allows a damaged soul be found."—Kent Russell, author of I Am Sorry to Think I Have Raised a Timid Son

"A captivating and witty memoir about a young lawyer's gut-wrenching struggle with mental illness and the fierce, protective love of his remarkable mother and dedicated friends, Zack McDermott's Gorilla and the Bird is not only a deeply powerful reminder of our own vulnerability, but a truly inspirational testament to the strength of the human spirit. This book makes accessible experiences that some may wish to ignore but that urgently require our attention, acceptance and empathy."—Elizabeth Ford, M.D., author of Sometimes Amazing Things Happen

"Gorilla and the Bird will make you laugh, cry, and wonder what would happen if we were all brave enough to tell the stories of our relationships with love and madness. I needed this book."—Kiese Laymon, author of How to Slowly Kill Yourself and Others in America

"A tale of madness, self-destruction, and the stalwart
presence of a family...McDermott's memoir is decidedly offbeat, unfolding
like a country song. There's the law, some good jokes, substance abuse, and
love lost and found, but there's also a keenly felt sense of justice for the
people who can't catch a break in this world, 'the dregs, the castoffs,
the addicts'...If the Joads were tanked up on Bud Light and Haldol
and Steinbeck were under Hunter S. Thompson's influence, this might be the
result-rueful, funny, and utterly authentic."

"[A] poignant and powerful debut...an important
resource for anyone impacted by the scope of bipolar disorder, as well as those
who want to learn more about it."

"Glorious...one of the best memoirs I've read in years. The sheer, sharp pleasure of McDermott's prose is reason enough to pick it up...Gorilla and the Bird, though sure to be marketed as a mental health memoir, is equally a tragicomic gem about family, class, race, justice, and the spectacular weirdness of Wichita, Kan.... McDermott gives us a flawed, funny, self-aware narrator with a powerful command of his own voice; he can move from barely controlled hilarity to the brink of rage to aching tenderness in a single breath. While he sustains his pell-mell pace from the first page to the last, he also covers an enormous amount of territory, carrying the reader from a brutally funny description of childhood in the heart of the Midwest to an unflinching exploration of the racism embedded in the American justice system. At the center of Gorilla and the Bird is a beautiful and profoundly affecting portrait of the Bird, McDermott's mother - a woman as real, raw, and obstinate in her love for the Gorilla [McDermott] as he is in his love for her...With deceptive effortlessness, this book carries the reader through both the peculiar twists and turns of the bipolar mind, and over some complex, shifting terrain in ethics and American life."—Marya Hornbacher, New York Times Book Review