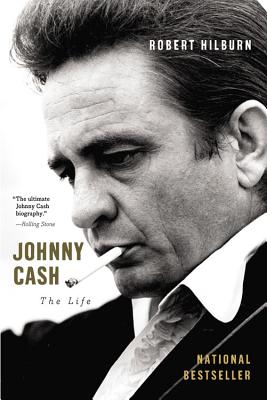 By Robert Hilburn
$20.00
Temporarily Out of Stock. Usually Ships in 3-5 Days.

"A thorough and thoughtful portrait of the Man in Black and a deep appreciation of his artistry... Hilburn writes most powerfully about Cash's trajectory as an artist... His writing is as authoritative as it's engaging when he's discussing the singer-songwriter's music." -- Michiko Kakutani, New York Times

"An excellent biography.... A story that's both larger and more fascinating than the legend.... Hilburn has created the definitive narrative of this 'symbol of American honor, compassion and struggle.' It's a biography worthy of its subject." -- USA Today

"The result of Hilburn's wrestling with his subject's life and with his own moral compass is perhaps the richest biography of a musician I have ever read, and one of the best biographies I have read, period.... Hilburn knows how to organize a life in print skillfully.... Hilburn is a first-rate stylist. His sentences often sing." -- Atlanta Journal Constitution

"Veteran music writer Hilburn...masterfully separates fiction from fact in an exhaustive, but never exhausting, biography of the legendary musician...The personal knowledge aided by extensive archival research and always compelling, accessible writing makes this an instant-classic music biography with something to offer all generations of listeners." -- Kirkus (starred review)

"Drawing on his own interviews and personal experience with Cash, former L.A. Times music critic Hilburn exhaustively chronicles, almost year by year, Cash's rise to fame from his childhood in Dyess, Ark., through his stint in the military, the peak of his success in the 1970s with the Johnny Cash Show, and on to his slow decline in health in the 1990s.... Hilburn is a spellbinding storyteller." -- Publishers Weekly (starred review)

"A comprehensive and thoughtful biography, cognizant always of how hard it is for heroes to make it in America...Hilburn does an artful, enviable job of reconciling all the facets [of Cash]...[and] writes with a remarkably steady hand...JOHNNY CASH is measured and mindful, allowing of all the paradoxical bits that constitute a human life." -- Los Angeles Times

"Hilburn's "Johnny Cash: The Life" is the big biography Cash's fans have been waiting for since the singer's death in 2003 and Hilburn doesn't let them down." -- Jeff Baker, The Oregonian

"'Do we really need another Johnny Cash book?' Yes, we really do, as it turns out, because Johnny Cash is so very good.... Hilburn's work is far and away the most insightful, entertaining, comprehensive, and well-told Cash biography to date." -- Slate

"Arguably the ultimate biography of The Man in Black." -- The San Antonio Current

"A riveting new biography of the Man in Black.... From Cash's birth in Kingsland, Arkansas, to his triumphant last decade, Hilburn covers it all through seven hundred pages of intimate and startling detail. It's the Man in Black in full." -- William Welch, Garden & Gun

"I listened to that stark unrelenting country as a kid. He was a hero of mine. I met him, finally, in a john at the Waldorf Astoria. He was taking a pee, and I broke out into 'Loading Coal.' We both zipped up and sung the final chorus together. One of my most cherished moments. You don't get much closer than that. Hilburn has written a brilliant story of an even more brilliant songwriter, warts and all." -- Keith Richards

"A definitive new biography of an American original.... How do you write an interesting biography of such a beloved figure? First, hire Robert Hilburn. He is a prodigious researcher, but he keeps a steady hand on the tiller, and never allows his research to swamp his narrative." -- The Economist

"The perfect Cash biography, as simple, fast and lean as 'Folsom Prison Blues'... Such a monumental figure deserves no less than this caring treatment of his sin-stained greatness." -- People

"Johnny Cash was a man both extraordinary and ordinary. Every man could relate to him, no man could be him, and only one man could get inside his head like Robert Hilburn." -- Bono

"It's always tricky to call a biography "definitive," but this one must surely come close." -- Booklist

"Hilburn got as close to the Cash inner circle as any journalist could...The most authoritative and revealing portrait to date." -- Wall Street Journal

"Hilburn writes in a clear, straightforward style... and fills in the outlines of Cash's life with meticulous detail... Cash is well-served by a biographer who finds a balanced approach to an often unbalanced life." -- Columbus Dispatch

"It's a rare gift to be given the opportunity to step far back from the confusing miasma of one's own childhood to see the entire soaring arc of a parent's life, and to be able to look clear-eyed at the puzzle of his character and the kaleidoscope of pain and beauty. This is the breathtaking gift Robert Hilburn has given me in a definitive biography of my father that is excruciatingly honest, rigorously researched, and has the depth and integrity that his subject demands. I had to take many breaks while reading this book to assimilate all the stories I knew, but had never put in a narrative context, being claustrophobically close to not only the events themselves but the resonance of those events. I felt dizzy from the sense of time travel and from the odd notion that Hilburn's masterful organization of the paradoxes and the fullness of who Johnny Cash was--and is--satisfies not only my father's family and fans, but himself as well. To those who fiercely cling to a one-dimensional view of my father to satisfy their own ideals--dark or light, saint or sinner, right or left--I challenge them to read this book and begin to understand a far, far more interesting and complex man: a truly great, visionary artist, a deeply flawed human being capable of experiencing inconceivable amounts of both love and pain, and a huge spirit who now belongs to the ages." -- Rosanne Cash

"Johnny Cash will be the definitive bio of the tortured, truculent but often generous singer.... Hilburn penetrates the heart of Cash's artistry.... The behind-the-scenes stories Hilburn unearths from those early days are engrossing for anyone interested in American roots music." -- Kirkus Reviews

"Johnny Cash and Robert Hilburn are two of the true blessings of my life. Both the best at what they do and each a gifted artist. It's a killer combination." -- Kris Kristofferson

"Assiduously researched and entertaining.... Hilburn rightly believes his subject's life is so extraordinary that there's no need for fanciful embellishment from anyone, including Cash himself." -- Entertainment Weekly

"The definitive work about Cash, a rich, engaging look at a very complicated man that is, by far, the best book ever about him and one of the best biographies, music or otherwise, that I've read.... It's a depiction of its subject that's as honest, revealing and resonant as The Man in Black himself." -- Lincoln Journal Star

"Johnny Cash succeeds at both expanding and complicating its subject. Hilburn does an artful, enviable job of reconciling all the facets...[It's] measured and mindful, allowing of all the paradoxical bits that constitute a human life." -- The Orlando Sentinel

"Between his love of music, his experience as one of the nation's leading music critics, and his long personal friendship with the subject, there is no one on earth more qualified to write this definitive book on the roller-coaster life of Johnny Cash than Robert Hilburn. Between the amount of research and the degree of detail he's put into this book, even Johnny would have learned something about himself if he were here to read it. Highly recommended!" -- Rick Rubin

"A definitive biography.... He tells, in great and sometimes harrowing detail, how Cash's professional advancement and personal decline blossomed simultaneously." -- The Washington Post

"A meticulous biography.... Hilburn gives a frank account of the singer's life...." -- The New Yorker

"Brilliant.... There are already over 50 titles written about or by Cash, yet Hilburn's work is a standout." -- Maclean's

"A thorough, compassionate and knowledgeable biography of an artist I knew well and admired tremendously... [Hilburn] pulls you into his story." -- Clive Davis

"The Man in Black's many fans will find this huge, sympathetic yet critical study of his serial rises, falls, betrayals and redemptions definitive." -- The Globe and Mail

"Full of information that will at once delight, depress, stimulate and surprise Cash's fans, Hilburn's admirable biography also evokes an image of the 'Man in Black,' staring ahead, somberly and slyly, and daring you to 'Figure me out, son.'" -- Tulsa World

"A library's worth of existing Johnny Cash volumes has finally gained a bio that depicts him as a fully-rounded human being.... No matter how many Johnny Cash books you've read, Robert Hilburn's Johnny Cash: The Life will be a different animal." -- CMT News

"While many others have tried to tell this story, including Cash himself with a couple of worthy autobiographies, Hilburn adds fresh and revealing details.... Quite simply, it's a monumental biography of a monumental American artist." -- Toronto Sun

"Hilburn humanizes the larger-than-life Man in Black in this evocative and surprising biography." -- Los Angeles Magazine

"Hilburn's writing is simple, ego-free and casually magisterial. There's no bombast to it; he lets Cash and company supply all the pyrotechnics." -- The Washington Post

"No doubt this long-awaited tome will go down as the definitive bio of the Man in Black - an epic befitting its subject." -- Vintage Guitar Magazine

"Hilburn writes passionately and respectfully....What Hilburn also does perfectly is present enough of Cash for you to love, hate and love him over and over again." -- Edge Media

"Undoubtedly a must-read for the completist, deep Cash fan." -- The Detroit News

"In his excellent biography...[he] uses the facts about the American cultural icon's life to construct a story that's both larger and more fascinating than the legend.... Hilburn has created the definitive narrative of this 'symbol of American honor, compassion and struggle.' It's a biography worthy of its subject." -- TribLive