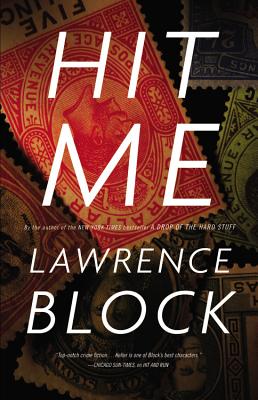 By Lawrence Block
$29.69
Out of Print - Contact us to order used copies.

A man named Nicholas Edwards lives in New Orleans renovating houses, doing honest work and making decent money at it. Between his family and his stamp collection, all his spare time is happily accounted for. Sometimes it's hard to remember that he used to kill people for a living.

But when the nation's economy tanks, taking the construction business with it, all it takes is one phone call to drag him back into the game. It may say Nicholas Edwards on his driver's license and credit cards, but he's back to being the man he always was: Keller.

Keller's work takes him to New York, the former home he hasn't dared revisit, where his target is the abbot of a midtown monastery. Another call puts him on a West Indies cruise, with several interesting fellow passengers -- the government witness, the incandescent young woman keeping the witness company, and, sharing Keller's cabin, his wife, Julia. But the high drama comes in Cheyenne, where a recent widow is looking to sell her husband's stamp collection . . .

In Hit Me, legendary Edgar Grandmaster and New York Times bestselling author Lawrence Block returns to one of his most beloved characters. Welcome back, Keller. You've been missed.

Lawrence Block is a Mystery Writers of America Grand Master who has won multiple Edgar and Shamus awards and countless international prizes. The author of more than 50 books, he lives in New York City.

"Block plays like a master on the consciences of his readers, raising moral dilemmas and then whisking them off behind a diverting bit of dialogue or drama."—The Columbus Dispatch

"In the hands of a lesser writer, the philately passages would be insufferable, but Block makes them interesting in their own right as well a window into the soul of a hit man who can dispatch innocent bystanders without remorse but won't cheat on his wife and insists on being scrupulously honest in the buying and selling of collectible stamps."—Associated Press

"It's a mark of Block's storytelling skill that he can make lengthy philatelic interludes as fascinating as cloaks and daggers ... It'd be a shame to hear no more from one of the most entertaining and unusual characters in the history of crime fiction, now that he's back on the job."—The Times-Picayune

"A fine finale for a writer who never stopped growing, and who allowed some of his series characters the same privilege of changing."—The Milwaukee Journal-Sentinel

"Despite claiming he's retired, Lawrence Block can't seem to resist taking a few swigs from the poisoned cup ... Aside from their ingenious methodology, what makes these amuse-bouches so delectable are the moral dilemmas Block throws up to deflect his philosophical anti­hero from a given task."—Marilyn Stasio, New York Times Book Review

"In the fifth entry in the Keller series (after Hit and Run), the appealing antihero with his own moral code continues to dig into the motives of his distant employers and make his own decisions about who deserves to die. But stamp collecting is more than just a secondary theme here, and Block's discourses about the history behind stamps are vivid enough to pique the interest even of those not at all inclined toward the hobby. Master mystery writer Block is at the top of his form here."—Michele Leber, Library Journal (starred review)

"It's easy to imagine Block grinning as he reinvents his always fascinating character [Keller]. Block writes so appealingly about the world of philately that some fans might decide to take up stamp collecting. HIT ME is a delightful change of pace."—Thomas Gaughan, Booklist (starred review)

At times casually ruthless in snuffing out targets, Keller is also honest and ethical in his business dealings. A final assignment involving a child suggests that Keller may even play an unfamiliar white knight role, hopefully in the near future."—Publishers Weekly (starred review)

PRAISE FOR A DROP OF THE HARD STUFF:

"Block is a mesmerizing raconteur ... elegiac ... a lament for all the old familiar things that are now almost lost, almost forgotten."—New York Times Book Review

One of the finest in the entire Scudder series ... highly recommended."
—Entertainment Weekly

"A Great American Crime Novel ... good to the last drop. Totally gripping. The perfect introduction to Scudder's shadow-strewn world and the pleasures of Block's crisp yet brooding prose, [and] a bracing distillation of Block's powers."
—Time

"Sometimes you open a novel and you just know you're in the hands of a master. In the case of Lawrence Block's latest Matt Scudder mystery, the tipoff is a brazenly simple plot premise, faultlessly executed...Like a lot of great mystery fiction, A Drop of the Hard Stuff is also a ghost story. Matt's attempt to exorcise his phantoms results in a classic tale about the stubborn persistence of memory and regret."
—--- NPR