Now Is the Time for Running (Hardcover) 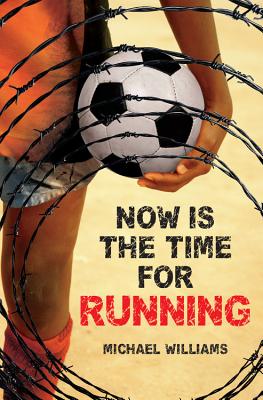 Now Is the Time for Running (Hardcover)


Hard to Find. This book may be unable to order.
When tragedy strikes, Deo's love of soccer is all he has left. Can he use that gift to find hope once more?

Just down the road from their families, Deo and his friends play soccer in the dusty fields of Zimbabwe, cheered on by Deo's older brother, Innocent. It is a day like any other ..until the soldiers arrive and Deo and Innocent are forced to run for their lives, fleeing the wreckage of their village for the distant promise of safe haven. Along the way, they face the prejudice and poverty that await refugees everywhere, and must rely on the kindness of people they meet to make it through.

Relevant, timely, and accessibly written, Now Is the Time For Running is a staggering story of survival that follows Deo and his mentally handicapped older brother on a transformative journey that will stick with readers long after the last page.
Michael Williams is a writer of plays, musicals, operas, and novels, and is the Managing Director of Cape Town Opera in South Africa. He is the author of several books, including the highly praised young adult novels Crocodile Burning and Now Is the Time for Running. He has written operas for young people based on African mythology as well as the libretti for symphonic operas that have premiered around the world. He finds writing fiction to be the perfect antidote to the drama of keeping an opera company alive in Africa.
Praise for Now Is the Time For Running:
"There is plenty of material to captivate readers: fast-paced soccer matches every bit as tough as the players; the determination of Deo and his fellow refugees to survive unthinkably harsh conditions; and raw depictions of violence... But it's the tender relationship between Deo and Innocent, along with some heartbreaking twists of fate, that will endure in readers' minds."—PW (starred review)

"Williams skillfully draws the plight of these refugee brothers with both suspense and sympathy, and readers cannot help but root for them in their quest to rebuild their broken lives... Williams joins Beverly Naidoo and Allan Stratton with this incisive portrait of sub-Saharan Africa, a compelling mix of suspense, sports, and social injustice."
—Horn Book