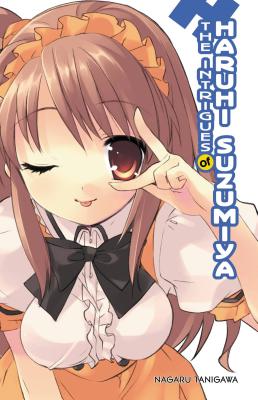 Hard to Find. This book may be unable to order.
(This book is not returnable.)

This is book number 7 in the The Haruhi Suzumiya Series series.

After closing a time loop fiasco in The Disappearance of Haruhi Suzumiya (Vol. 5), our protagonist Kyon is ready to start a new year with a blank slate--no time travel, no apocalyptic worries, and maybe some actual peace and quiet with the SOS Brigade, a club comprised of his high school's most extraordinary students. Their leader is Haruhi, a bold, brash girl who doesn't realize that she's actually a powerful goddess whose moods can easily change the balance of the universe.

Just as Kyon starts to get comfortable, he gets a visit from his friend Mikuru. Except this isn't his Mikuru; it's a Mikuru from eight days in the future! Time traveling shenanigans start all over again as Kyon, guided by the future Mikuru, attempts to stop a terrible future from becoming a reality.

Nagaru Tanigawa is a Japanese author best known for The Melancholy of Haruhi Suzumiya for which he won the grand prize at the eighth annual Sneaker Awards.