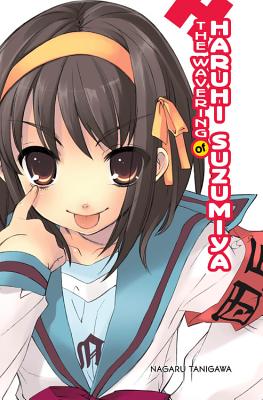 This is book number 6 in the The Haruhi Suzumiya Series series.

In Book 6 in the series, readers take a step into a time warp in five short stories. Head back to events from the previous books, and previously unseen scenes and perspectives to uncover mysteries that had been left unanswered.

Live Alive
Kyon peruses the stalls at the cultural festival and visits Mikuru's noodle stall. Everything seems normal for once, until a surprise band shows up to perform.

The Adventures of Mikuru Asahina: Episode 00
The movie that the SOS Brigade created in The Sigh of Haruhi Suzumiya (Book 2) is shown, and the Bridage gets to see it in its final form.

Love at First Sight
Kyon meets with an old friend, who describes seeing a girl he's fallen in love with--and it turns out to be Yuki! Will this mere human have a chance with the world's most stoic robot?

Where Did the Cat Go?
This story takes readers back to Book 3 (The Rampage of Haruhi Suzumiya) in which the SOS Brigade finally begins the main event for the Snow Mountain retreat murder mystery.

The Melancholy of Mikuru Asahina
Mikuru asks Kyon to accompany her to buy tea leaves, but a secret motive may be involved.


Nagaru Tanigawa is a Japanese author best known for The Melancholy of Haruhi Suzumiya for which he won the grand prize at the eighth annual Sneaker Awards.