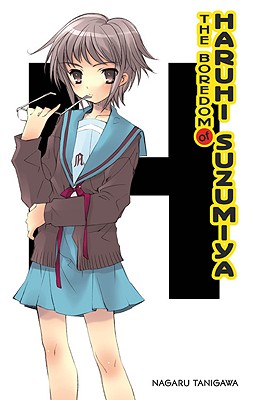 This is book number 3 in the The Haruhi Suzumiya Series series.

This third volume in the Haruhi Suzumiya series is a collection of four exciting short stories that chronologically take place before The Sigh of Haruhi Suzumiya.

The Boredom of Haruhi Suzumiya:
In her latest attempt to give the S.O.S. Brigade more public exposure, Haruhi signs the group up for the city-wide baseball tournament.

Bamboo Leaf Rhapsody:
It's like Back To the Future! In order to prevent an impending disaster, Mikuru takes Kyon back in time, where he meets Haruhi as a seventh grader.

Mysterique Sign:
The computer club president at school mysteriously disappears, and it's up to the S.O.S. Brigade to get to the bottom of it!

Remote Island Syndrome:
It's vacation time when a relative of Itsuki's invites the S.O.S. Brigade to stay at his island villa. But then a dead body turns up, and Haruhi and the gang get mixed up in a thrilling murder mystery.
Nagaru Tanigawa is a Japanese author best known for The Melancholy of Haruhi Suzumiya for which he won the grand prize at the eighth annual Sneaker Awards. Tanigawa is currently working on the tenth novel about Haruhi Suzumiya and the S.O.S. Brigade.