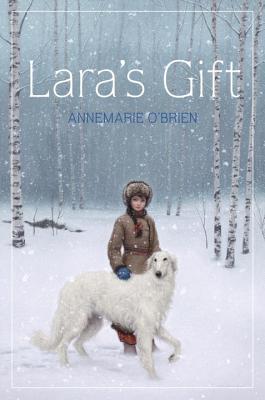 By Annemarie O'Brien
$18.69
Out of Print - Contact us to order used copies.

Young Lara is being groomed in the family tradition to take over as Count Voronstov's next kennel steward, breeding borzoi dogs worthy of the Tsar. But then Lara's baby brother is born and she finds herself supplanted as her father decides to make her brother the next kennel steward. Going against her father's wishes and becoming increasingly sure of her special gift of understanding these incredible dogs, Lara risks everything when she reveals the truth about her visions. Now she must save Zar, her favorite borzoi and the one she raised from birth, from a hungry pack of wolves. Only then can she find her own, extraordinary destiny. . . .

ANNEMARIE O'BRIEN has an MFA in Writing for Children & Young Adults from Vermont College of Fine Arts. She teaches writing courses at UC Berkeley and Stanford. Before that, she worked for many years in Russia, where she got her first borzoi dog. Annemarie lives in Northern California with her two daughters and two borzoi dogs.

Starred Review, School Library Journal, September 2013:
"Compelling historical fiction, this is also a powerful story about the bond between dogs and humans, fathers and daughters.”

Booklist, August 1, 2013:
"Dog lovers especially will pick up this trail right away and eagerly track the appealing heroine’s adventures."