Around the World in 80 Words: A Journey through the English Language (Paperback) 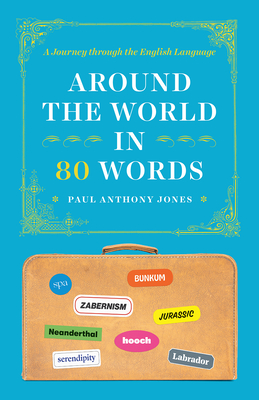 Around the World in 80 Words: A Journey through the English Language (Paperback)


Available to order! Usually Ships to Store in 3-5 Days.
What makes a place so memorable that it survives forever in a word? In this captivating round-the-world tour, Paul Anthony Jones acts as your guide through the intriguing stories of how eighty places became immortalized in the English language. You’ll discover why the origins of turkeys, limericks, Brazil nuts, and Panama hats aren’t quite as straightforward as you might presume. If you’ve never heard of the tiny Czech mining town of Jáchymov—or Joachimsthal, as it was known until the late 1800s—you’re not alone, which makes its claim to fame as the origin of the word “dollar” all the more extraordinary. The story of how the Great Dane isn’t all that Danish makes the list, as does the Jordanian mountain whose name has become a byword for a tantalizing glimpse. We’ll also find out what the Philippines has given to your office inbox, what Alaska has given to your liquor cabinet, and how a speech given by a bumbling North Carolinian gave us a word for impenetrable nonsense.

Surprising, entertaining, and illuminating, this is essential reading for armchair travelers and word nerds. Our dictionaries are full of hidden histories, tales, and adventures from all over the world—if you know where to look.

Paul Anthony Jones is a writer, etymologist, and language blogger. He is the author of several books on language, including The Cabinet of Linguistic Curiosities. He shares his linguistic discoveries via the Twitter account @HaggardHawks, which was named one of Twitter’s best language accounts by Mental Floss. He lives in Newcastle upon Tyne.

"A fabulous and erudite survey of words inspired by place names. . . . Logophiles will have a ball."
— Publishers Weekly, starred review

“Do read this book in the correct order—the author has gone to great lengths to make sense of his eccentric itinerary—but be mindful of the turkey. To read it all at once would be like swallowing the globe. Don’t skip the footnotes, which are like delicious side dishes, and whatever you do, don’t Google the nasty limerick by Aubrey Beardsley about St. Rose of Lima.”
— Mary Norris

"[An] entertaining look at the lexicon. . . . [Jones] proves a most capable and agreeable guide: erudite and affable, always informative and often funny, he steers us with a clear, breezy, colloquial style through 80 destinations and the 80 principal words that he traces to their names. . . . Well researched and well guided, Jones’ tour instructs and delights."
— Washington Independent Review of Books