Americans Against the City: Anti-Urbanism in the Twentieth Century (Paperback) 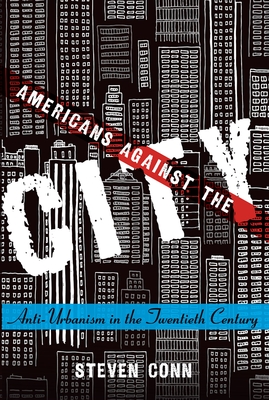 By Steven Conn
$48.91
Available to order! Usually Ships to Store in 3-5 Days.
(This book is not returnable.)

It is a paradox of American life that we are a highly urbanized nation filled with people deeply ambivalent about urban life. An aversion to urban density and all that it contributes to urban life, and a perception that the city was the place where big government first took root in America fostered what historian Steven Conn terms the anti-urban impulse. In response, anti-urbanists called for the decentralization of the city, and rejected the role of government in American life in favor of a return to the pioneer virtues of independence and self-sufficiency. In this provocative and sweeping book, Conn explores the anti-urban impulse across the 20th century, examining how the ideas born of it have shaped both the places in which Americans live and work, and the anti-government politics so strong today. Beginning in the booming industrial cities of the Progressive era at the turn of the 20th century, where debate surrounding these questions first arose, Conn examines the progression of anti-urban movements.: He describes the decentralist movement of the 1930s, the attempt to revive the American small town in the mid-century, the anti-urban basis of urban renewal in the 1950s and '60s, and the Nixon administration's program of building new towns as a response to the urban crisis, illustrating how, by the middle of the 20th century, anti-urbanism was at the center of the politics of the New Right. Concluding with an exploration of the New Urbanist experiments at the turn of the 21st century, Conn demonstrates the full breadth of the anti-urban impulse, from its inception to the present day. Engagingly written, thoroughly researched, and forcefully argued, Americans Against the City is important reading for anyone who cares not just about the history of our cities, but about their future as well.

Steven Conn is Professor and Director, Public History, Ohio State University. He is the author of, To Promote the General Welfare: The Case for Big Government; Metropolitan Philadelphia: Living in the Presence of the Past, among others; he is the co-editor of Building the Nation: Americans Write about Their Architecture, Their Cities, and Their Landscape.