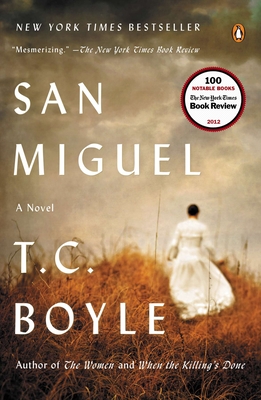 Just off the coast of Southern California, two families—one in the 1880s and one in the 1930s—come to desolate, windswept San Miguel Island in search of self-reliance, freedom, and a new start in their lives. Both Marantha Waters and Elise Lester strive to help their war veteran husbands pursue their dreams but must themselves grapple with the more nebulous hardships of raising a family in brutal isolation. Boyle “skillfully captures that tension-filled quietude” (The New Times Book Review) in this lyrical, intimate, and unforgettable novel.

T.C. Boyle is the author of fourteen novels and nine short story collections and is a member of the Academy of Arts and Letters. He lives near Santa Barbara, California.

“Mesmerizing and elegiac…the star of the book is the island itself, San Miguel, in all its glorious barrenness…the island is entirely cut off from civilization for weeks or months at a time. Boyle skillfully captures that tension-filled quietude in the pared-down, mundane details of clearing, cooking, caring for livestock and enduring the tedium of unchanging days…it is a brave stylistic choice that pays off, allowing the reader a visceral experience of what life was like at that time.” —Tatjana Soli, The New York Times Book Review

“An absorbing work of historical fiction based on the lives of two real families who resided on San Miguel island in the 19th and 20th centuries…the intensity of Boyle’s narrative never lets it flag…San Miguel lures you away by yourself, off to a quiet, lonely place, and makes you think about how lives play out and then pass across the natural world.” —Ron Charles, The Washington Post

“A saga of women, three women brought to the island by men…Boyle has carved out a beautiful, damp, atmospheric novel, sharp and exacting…[his] spirited novels are a reckoning with consequence laced with humor, insight, and pathos.” —Terry Tempest Williams, The San Francisco Chronicle

“Although his sentences are vivid and vigorous, and his observations are, as always, uncannily precise, the reader is aware not so much of the writer as of the three stalwart women whose rich stories he tells.” —The Atlantic

“Throughout his career, Boyle has shown a fascination with remote, forgotten places as a kind of stage where various shadings of the American character are revealed…As always, he fills his pages with wonderfully precise character studies and lush descriptions of the physical landscape.” —Hector Tobar, The Los Angeles Times

“While the prose remains as exuberant and biting as ever, Boyle has stripped away every trace of his landmark irony to stunning effect…he never suggests that [the Lesters] – or any of these people – deserved their fate. In the past, Boyle has moved characters around like puppets to score satirical points. In San Miguel, he sets them free.” —Jennifer Reese, National Public Radio

“A book about the fallacy of more, of ownership, of second starts…Boyle is one of the most stylish, electric writers around. Here, though, he puts away the razzle-dazzle of his tool kit to write his way into the heart and mind of a woman with diminishing horizons.” —John Freeman, The Minneapolis Star Tribune

“The story of two families who lived on the windiest and wildest of the Channel Islands…the layering of these isolated lives, the archeology of human habitation, the different responses to self-sufficiency make this one of the most satisfying novels in Boyle’s canon.” —Susan Salter Reynolds, Los Angeles Magazine

“In T.C. Boyle’s San Miguel, two strong women generations apart are seduced and mistreated by the same powerful entity – not a man but a starkly beautiful, barely inhabited island off the California coast…Boyle portrays the heartbreaking toll San Miguel takes on these couples in a novel as beguiling as the island itself.” —O The Oprah Magazine