The Book of Disquiet (Paperback) 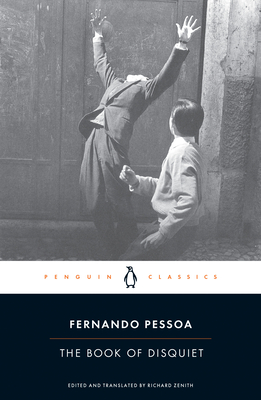 The Book of Disquiet (Paperback)

The prizewinning, complete and unabridged translation—“the best English-language version we are likely to see for a long time, if ever” (The Guardian)—of a work of unclassifiable genius: the crowning achievement of Portugal’s modern master

Edited, Translated, and with an Introduction by Richard Zenith, the author of the Pulitzer Prize finalist Pessoa: A Biography

Winner of the Calouste Gulbenkian Translation Prize for Portuguese Translation

Fernando Pessoa was many writers in one. He attributed his prolific writings to a wide range of alternate selves, each of which had a distinct biography, ideology, and horoscope. When he died in 1935, Pessoa left behind a trunk filled with unfinished and unpublished writings, among which were the remarkable pages that make up his posthumous masterpiece, The Book of Disquiet, an astonishing work that, in George Steiner's words, "gives to Lisbon the haunting spell of Joyce's Dublin or Kafka's Prague."

Published for the first time some fifty years after his death, this unique collection of short, aphoristic paragraphs comprises the "autobiography" of Bernardo Soares, one of Pessoa's alternate selves. Part intimate diary, part prose poetry, part descriptive narrative, captivatingly translated by Richard Zenith, The Book of Disquiet is one of the greatest works of the twentieth century.

“Pessoa is a genius.” —André Aciman

Fernando Pessoa (1888–1935) was born in Lisbon and brought up in Durban, South Africa. He returned to Lisbon in 1905. A prolific writer, ascribing his work to a variety of personas or heteronyms, Pessoa published little in his lifetime and supported himself by working as a commercial translator. Although acknowledged as an intellectual and a poet, his literary genius went largely unrecognized until after his death.

Richard Zenith (editor, translator, introducer) lives in Lisbon, where he works as a freelance writer, translator, and critic. He was a finalist for the Pulitzer Prize for Pessoa: A Biography. His translations include Galician-Portuguese troubadour poetry; novels by Antonio Lobo Antunes; Pessoa's A Little Larger Than the Entire Universe: Selected Poems; Fernando Pessoa and Co.: Selected Poems, which won the PEN Award for Poetry in Translation; and João Cabral de Melo Neto's Education by Stone: Selected Poems, which won the Academy of American Poets’ Harold Morton Landon Translation Award. In 2012, Zenith was awarded Portugal’s Pessoa Prize.
“I can’t tell which of the three English-language editions of The Book of Disquiet I’ve read . . . most accurately conveys the style and spirit of Pessoa, but judging the English alone, Zenith’s translation is most compelling. . . . I want Pessoa to be as great as the version Zenith presents.” —Chris Power, New Statesman

“A Modernist touchstone . . . no one has explored alternative selves with Pessoa’s mixture of determination and abandon . . . In a time which celebrates fame, success, stupidity, convenience and noise, here is the perfect antidote, a hymn of praise to obscurity, failure, intelligence, difficulty, and silence.” —The Daily Telegraph

“His prose masterpiece . . . Richard Zenith has done an heroic job in producing the best English-language version we are likely to see for a long time, if ever.” —The Guardian

“The Book of Disquiet was left in a trunk which might never have been opened. The gods must be thanked that it was. I love this strange work of fiction and I love the inventive, hard-drinking, modest man who wrote it in obscurity.” —Independent

“Must rank as the supreme assault on authorship in modern European literature . . . readers of Zenith’s edition will find it supersedes all others in its delicacy of style, rigorous scholarship and sympathy for Pessoa’s fractured sensibility . . . the self-revelation of a disoriented and half-disintegrated soul that is all the more compelling because the author himself is an invention . . . Long before postmodernism became an academic industry, Pessoa lived deconstruction.” —New Statesman

“Extraordinary . . . a haunting mosaic of dreams, autobiographical vignettes, shards of literary theory and criticism and maxims.” —The Observer

“Pessoa’s rapid prose, snatched in flight and restlessly suggestive, remains haunting, often startling, like the touch of a vibrating wire, elusive and persistent like the poetry . . . there is nobody like him.” —The New York Review of Books

“This superb edition of The Book of Disquiet is . . . a masterpiece.”  —The Daily Telegraph

“I plan to use this book every year in my course at Yale. Thanks for making it available.” —K. David Jackson, Yale University