The Epic of Gilgamesh (Paperback) 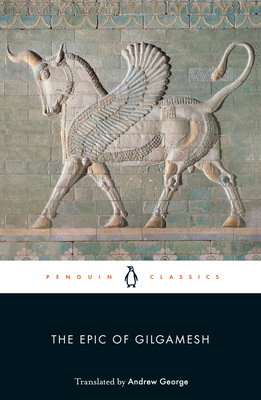 The Epic of Gilgamesh (Paperback)

Miraculously preserved on clay tablets dating back as much as four thousand years, the poem of Gilgamesh, king of Uruk, is the world’s oldest epic, predating Homer by many centuries. The story tells of Gilgamesh’s adventures with the wild man Enkidu, and of his arduous journey to the ends of the earth in quest of the Babylonian Noah and the secret of immortality. Alongside its themes of family, friendship and the duties of kings, the Epic of Gilgamesh is, above all, about mankind’s eternal struggle with the fear of death.

The Babylonian version has been known for over a century, but linguists are still deciphering new fragments in Akkadian and Sumerian. Andrew George’s gripping translation brilliantly combines these into a fluent narrative and will long rank as the definitive English Gilgamesh.

For more than seventy years, Penguin has been the leading publisher of classic literature in the English-speaking world. With more than 1,700 titles, Penguin Classics represents a global bookshelf of the best works throughout history and across genres and disciplines. Readers trust the series to provide authoritative texts enhanced by introductions and notes by distinguished scholars and contemporary authors, as well as up-to-date translations by award-winning translators.
Andrew George is Professor of Babylonian in the Department of Languages and Culture of Near and Middle East at University of London's School of Oriental and African Studies.
“It’s among the oldest surviving works of Western civilization, from before literature was literature. It’s my go-to whenever loss and life have tumbled me (often). Amazingly, and perhaps depressingly (When will they ever learn?), Gilgamesh tackles all the issues we are dealing with today: a bad leader and how he becomes an enlightened one (here’s hoping), environmental degradation, class and race — i.e. who gets to be called human — lust and love; loss and death. The language is haunting, incantatory, at the border of song and silence.”
—Julia Alvarez

“Humankind’s first literary achievement...Gilgamesh should compel us as the well-spring of which we are inheritors...Andrew George provides an excellent critical and historical introduction.”
—Paul Binding, Independent on Sunday

“This volume will endure as one of the milestones markers...[George] expertly and easily conducts his readers on a delightful and moving epic journey.”
—Samuel A. Meier, Times Literary Supplement

“Appealingly presented and very readably translated...it still comes as an exhilarating surprise to find the actions and emotions of the Sumerian superhero coming to us with absolute immediacy over 30-odd centuries.
—Scotsman

“Andrew George has formed an English text from the best of the tablets, differentiating his complex sources but allowing the general reader a clear run at one of the first enduring stories ever told.”
—Peter Stothard, The Times

“An exemplary combination of scholarship and lucidity...very impressive...invaluable as a convenient guide to all the different strands which came together to produce the work we now call Gilgamesh.”
—Alan Wall, Literary Review