To Rescue the Republic: Ulysses S. Grant, the Fragile Union, and the Crisis of 1876 (Hardcover) 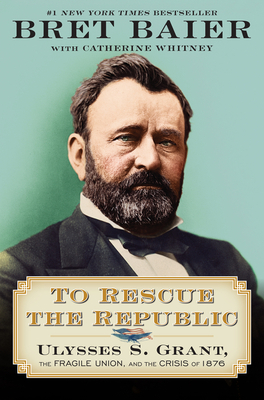 To Rescue the Republic: Ulysses S. Grant, the Fragile Union, and the Crisis of 1876 (Hardcover)

"To Rescue the Republic is narrative history at its absolute finest. A fast-paced, thrilling and enormously important book." —Douglas Brinkley

An epic history spanning the battlegrounds of the Civil War and the violent turmoil of Reconstruction to the forgotten electoral crisis that nearly fractured a reunited nation, Bret Baier’s To Rescue the Republic dramatically reveals Ulysses S. Grant’s essential yet underappreciated role in preserving the United States during an unprecedented period of division.

Born a tanner’s son in rugged Ohio in 1822 and battle-tested by the Mexican American War, Grant met his destiny on the bloody fields of the Civil War. His daring and resolve as a general gained the attention of President Lincoln, then desperate for bold leadership. Lincoln appointed Grant as Lieutenant General of the Union Army in March 1864. Within a year, Grant’s forces had seized Richmond and forced Robert E. Lee to surrender.

Four years later, the reunified nation faced another leadership void after Lincoln’s assassination and an unworthy successor completed his term. Again, Grant answered the call. At stake once more was the future of the Union, for though the Southern states had been defeated, it remained to be seen if the former Confederacy could be reintegrated into the country—and if the Union could ensure the rights and welfare of African Americans in the South. Grant met the challenge by boldly advancing an agenda of Reconstruction and aggressively countering the Ku Klux Klan.

In his final weeks in the White House, however, Grant faced a crisis that threatened to undo his life’s work. The contested presidential election of 1876 produced no clear victory for either Republican Rutherford B. Hayes or Democrat Samuel Tilden, who carried most of the former Confederacy. Soon Southern states vowed to revolt if Tilden was not declared the victor. Grant was determined to use his influence to preserve the Union, establishing an electoral commission to peaceably settle the issue. Grant brokered a grand bargain: the installation of Republican Hayes to the presidency, with concessions to the Democrats that effectively ended Reconstruction. This painful compromise saved the nation, but tragically condemned the South to another century of civil-rights oppression.

Deep with contemporary resonance and brimming with fresh detail that takes readers from the battlefields of the Civil War to the corridors of power where men decided the fate of the nation in back rooms, To Rescue the Republic reveals Grant, for all his complexity, to be among the first rank of American heroes.

Bret Baier is the chief political anchor for Fox News Channel and the anchor and executive editor of Special Report with Bret Baier. He previously served as Chief White House Correspondent for Fox News Channel and as the network’s National Security Correspondent based at the Pentagon, reporting on military and national security affairs. A recipient of the National Press Foundation’s Sol Taishoff Award for Excellence in Broadcast Journalism, Baier is the author of the New York Times bestsellers Three Days at the Brink: FDR’s Daring Gamble to Win WWII; Three Days in Moscow: Ronald Reagan and the Fall of the Soviet Empire; Three Days in January: Dwight Eisenhower’s Final Mission; and Special Heart: A Journey of Faith, Hope, Courage and Love. He lives with his family in Washington, DC.

Catherine Whitney has written or collaborated on more than twenty-five books, including Framing a Life: A Family Memoir with Geraldine Ferraro and Guilty: The Collapse of Criminal Justice with the late Judge Harold J. Rothwax.

“Bret Baier’s To Rescue the Republic is narrative history at its absolute finest. With great verve and a fair-and-balanced ethic, Baier brilliantly recounts the heroic life of Ulysses S. Grant—as Civil War general, U.S. President, Reconstruction Era leader and beloved national icon. His dramatic retelling of the election of 1876 which pitted Samuel J. Tilden against Rutherford B. Hayes is stupendous. A fast-paced, thrilling and enormously important book. Highly recommended.” — Douglas Brinkley, Katherine Tsanoff Brown Chair in Humanities and Professor of History at Rice University and author of American Moonshot

“With To Rescue The Republic, Bret Baier, the nation’s leading reporter of history, has written a veritable tour de force. This remarkable book is history as it should be: magnificently composed, meticulously researched, and brimming with lessons for today's divided political arena. Baier has brought to life the riveting but too often forgotten story of how US Grant preserved the Republic at one of its moments of greatest peril. This is not just a tale for our age, but an absorbing tale for the ages. It belongs on the bookshelf of every lover of history.” — Jay Winik, New York Times bestselling author of April 1865 and 1944

“Yes, history can help light the way. Bret Baier’s absorbing book shows us why Ulysses Grant was a far more important President than later generations gave him credit for, and how the crises of civil war, Reconstruction and the deadlock of 1876 resembled the turbulent period we are living through.” — Michael Beschloss, author of Presidents of War

“A thoroughly researched account of the Civil War general’s life and work. Baier grippingly portrays the crisis Grant faced at the end of his presidency, when the election produced no clear successor, and the painful compromise that settled it—a historical moment ripe for examination today.” — New York Post

“Until recently, historians have tended to focus on the rampant corruption that took place during the administration of Ulysses S. Grant. … Baier (Three Days at the Brink, 2020) surveys Grant’s life from his Midwestern origins through his undistinguished West Point education, his military successes leading Union forces, and his 1868 elevation to the Presidency. … Baier finds parallels to contemporary politics in this, which makes his account all the more compelling.” — Booklist

“Throughout history, great men have stepped forward at just the right moment to save America at its most critical times. In To Rescue the Republic, Bret Baier brilliantly chronicles how Ulysses S. Grant was that great man multiple times. Perhaps you think you know the story, but Bret brings you back to the 1870s in a way I didn’t think possible. A must read!”  — Brian Kilmeade, #1 New York Times bestselling author

“Bret Baier once again brings his wonderful journalistic storytelling skills to the task of examining a significant moment in American history. To Rescue the Republic is the richly detailed and often suspenseful story of Ulysses S. Grant, our 18th president. In particular Bret focuses on those dramatic moments when Grant rescues the Republic—first during the Civil War, then making the peace after the war, and finally in the bitterly contested election of 1876, when he devised a grand bargain to save the presidency and the nation. The parallels with modern times are striking, and the lessons Bret raises are worth serious attention: the future of the Republic isn’t a given. We must fight for it in every era.” — Mark Levin, #1 New York Times bestselling author

“A brilliant character study of a great American. In To Rescue the Republic, Bret Baier brings Ulysses S. Grant—war hero, president, and author—to life in a vivid, gripping style that speaks to the issues of our time." — James L. Swanson, New York Times bestselling author of Manhunt: The 12-Day Chase for Lincoln’s Killer

"As the United States suffers through turbulent times, news anchor Bret Baier reaches back to earlier years of heroism when the nation, then and now, experienced an earlier examples of woe. This is a book which, when carefully read, provides insight into a difficult era." — John F. Marzalek, Executive Director, Ulysses S. Grant Presidential Library

“Bret Baier has provided a valuable public service by showing why Ulysses S. Grant deserves much more public acclaim for his presidential years than Grant has traditionally been given. If you enjoy reading about American history, you will love Bret Baier’s fresh look at the man most responsible for the outcome of the Civil War and the peaceful resolution of the contested presidential election of 1876. I highly recommend this book on one of America’s most important leaders.” — David Rubenstein,