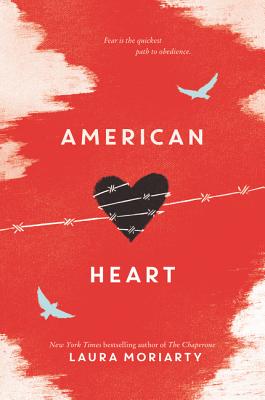 Laura Moriarty’s new dystopian novel, American Heart, pays homage to Mark Twain’s “The Adventures of Huckleberry Finn.”  The book opens in Hannibal, MO. when a 15 year old white girl, Sarah-Mary reluctantly agrees to aid a fugitive woman of Middle Eastern origins escape to Canada.  This woman takes an alias, Chloe, and is on the run for breaking a new American law requiring Muslims to register with the government.

Beginning in Missouri and traversing  north to the border Sarah-Mary and Chloe are threatened to be exposed when they check into motels. pass time in roadside cafes, hitch rides, and finally, seek passage across the Canadian border.  Sarah-Mary, a skeptical teenager questions her loyalty to Chloe again and again because the larger forces at play are beyond her understanding.  But she is also impressionable and adopts the passion of the newly converted when she comes to understand the precarious circumstances Chloe is in.

Moriarty’s book has something else in common with Huck Finn...controversy.  She has been accused of cultural appropriation because she’s  written a white savior  story featuring a Muslim American from the Middle East.

Zadie  Smith recently  made an argument in support all storytellers:  as an artist, she wants to get into the head of every size, shape, and color of person.  However, as a reader she doesn’t have to read anything she chooses not to.

I chose to read this novel expecting a great story and it delivered.  I was also immersed in the fragile world of two Americans who got deeply into the other’s head, resulting in growth, empathy and understanding.