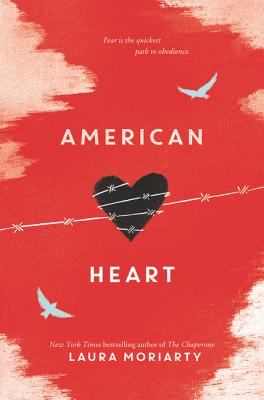 By Laura Moriarty
$17.99
Temporarily Out of Stock. Usually Ships in 3-5 Days.

American Heart, Laura Moriarty’s first YA novel, takes place in a future (or possibly contemporary) America in which the government has instituted a Muslim registry and forced all Muslims into detainment camps. Sadaf, a smart and deeply emotional Muslim American professor of Electrical Engineering, is on-the-fly when she meets Sarah-Mary, a spunky, seventeen-year-old atheist who agrees, against her nascent and misguided ideas of patriotism, to help ferry Sadaf (a la Huckleberry Finn) to freedom in Canada.

On a nuts-and-bolts level, the novel is entertaining, suspenseful, and, at times, immensely funny. Readers of all ages will find value in the complicated relationship between Sarah-Mary and Sadaf, as well as their relationship to the larger world with which they must contend. The novel relies on a diverse cast of characters—African American, Asian American, Muslim, Christian, Jewish, gay, upper-class conservative—who come to Sarah-Mary and Sadaf’s aid as they hitchhike across the Midwest. While Sarah-Mary does help Sadaf on this journey, it has little to do with the novel’s take-away, which is that the 21st century American heart needs some serious examination, particularly those hearts that are white.

It’s unfortunate that American Heart has garnered such harsh criticism (as well as empty and therefore meaningless praise) from people who, in large part, have not read it—a phenomenon that portends a dangerous trend in cultural censorship, both in attitude and in practice. Especially for teenagers and preteens on the brink of forming their own political ideologies (or adults in need of recalibration), this book is a timely and necessary contribution to the discussion of race, religion, and politics in contemporary America.

Becky Mandelbaum, author of Bad Kansas, is a former student of Laura Moriarty.

The book opens in Hannibal, Missouri, when a 15-year-old white girl, Sarah-Mary, reluctantly agrees to aid a fugitive woman of Middle Eastern descent escape to Canada. This woman takes an alias, Chloe, and is on the run for breaking a new American law requiring Muslims to register with the government.

As they travel north to the border, Sarah-Mary and Chloe--in danger of being exposed when they check into motels--pass time in roadside cafes, hitch rides, and finally, seek passage across the Canadian border. Sarah-Mary questions her loyalty to Chloe again and again because the larger forces at play are beyond her understanding. But she is also impressionable and adopts the passion of the newly converted when she comes to understand the precarious circumstances Chloe is in.

Moriarty’s book has something else in common with Huck Finn: controversy. She has been accused of cultural appropriation because she’s written a white savior story featuring a Muslim American from the Middle East. Zadie Smith recently made an argument in support of all storytellers: as an artist, she wants to get into the head of every size, shape, and color of person. However, as a reader she doesn’t have to read anything she chooses not to.

I chose to read this novel expecting a great story and it delivered. I was also immersed in the fragile world of two Americans who get deeply into the other’s head, resulting in growth, empathy and understanding.