My Cross to Bear (Paperback) 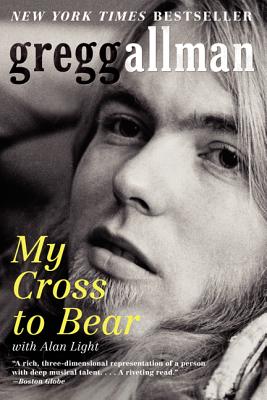 For the first time, rock music icon Gregg Allman, one of the founding members of The Allman Brothers Band, tells the full story of his life and career in My Cross to Bear. No subject is taboo, as one of the true giants of rock ’n’ roll opens up about his Georgia youth, his long struggle with substance abuse, his string of bad marriages (including his brief union with superstar Cher), the tragic death of  brother Duane Allman, and life on the road in one of rock’s most legendary bands.

Gregg Allman is one of the original members of the Allman Brothers Band, a member of the Rock and Roll Hall of Fame, and a recipient of a Grammy Lifetime Achievement Award. He continues to make music as a solo artist and with the Allman Brothers and lives in Georgia.

Alan Light is a former editor-in-chief of Vibe and Spin magazines, and a frequent contributor to the New York Times and Rolling Stone.

…This book is everything you could hope for: in a grizzled, laconic drawl, Allman provides a rambling backstage account of his five decades with the Allman Brothers Band, and he doesn’t seem to hold anything back.
— New York Times Book Review

A soul-searching rumination on a hard-lived life... For generations of fans, Allman’s book provides insights into the many turns in that long road... MY CROSS TO BEAR carries a welcome seal of honesty.
— USA Today

In his memoir, the rambling and rambunctious Gregg Allman lays bare his soul… In the end, Allman, writing with music journalist Light, has produced a fiercely honest memoir.
— Publishers Weekly (starred review)

This is a story about musical brotherhood. Rich and moving... Nothing less than profound. Life, love and music from one of the most influential American recording artists of the last 40 years.
— Kirkus Reviews

“Packed with juicy anecdotes, gripping details and raw energy…Fans of the Allman Brothers Band are certain to relish the revelations... MY CROSS TO BEAR provides a window into Allman’s tortured soul - he presents himself as a man cracked and flawed, yet somehow intact.”
— Birmingham News