Outlaw: Waylon, Willie, Kris, and the Renegades of Nashville (Hardcover) 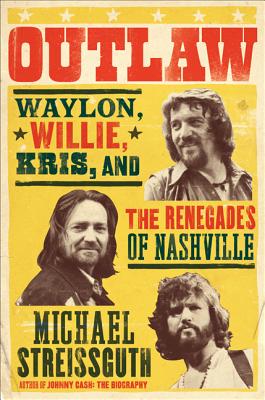 By Michael Streissguth
$26.99
Out of Print - Contact us to order used copies.

Streissguth delves into the country music scene in the late '60s and early '70s, when these rebels found themselves in Music City writing songs and vying for record deals. Channeling the unrest of the times, all three Country Music Hall of Famers resisted the music industry’s unwritten rules and emerged as leaders of the outlaw movement that ultimately changed the recording industry.

Outlaw offers a broad portrait of the outlaw movement in Nashville that includes a diverse secondary cast of characters, such as Johnny Cash, Rodney Crowell, Kinky Friedman, and Billy Joe Shaver, among others.

With archival photographs throughout, Outlaw is a comprehensive examination of a fascinating shift in country music, and the three unbelievably talented musicians who forged the way.

Michael Streissguth is the author of eight books, including Johnny Cash: The Biography. A professor in the Department of Communication and Film Studies at Le Moyne College in Syracuse, New York, he has written for Mojo, the Journal of Country Music, Bluegrass Unlimited, and many other publications. He has written and produced two documentary films, Record Paradise and Johnny Cash at Folsom Prison. He lives in Syracuse with his wife and family.

“A biting, in-depth chronicle of Nashville’s most tumultuous era told through the voices of iconic artists who used their music to accomplish significant changes in the music industry.”
— Kirkus Reviews (starred review)

Offers a look at the how the ‘outlaw’ music of Waylon Jennings, Willie Nelson and Kris Kristofferson shook up Nashville in the late ‘60s and ‘70s. . . . Author Streissguth has country music bona fides: He also wrote Johnny Cash: The Biography.
— USA Today

A riveting look at how how three Texans joined forces to liberate Nashville from its company-town ways in the 1970s. It is a small group portrait, tightly focused and well told by Michael Streissguth.
— Wall Street Journal

Streissguth goes widescreen with this look at the social and musical ferment that produced the Seventies outlaw-country movement… [he] skillfully portrays Sixties Nashville’s studio politics and their gradual loosening up, alongside a city where post-Sixties social change took its time arriving.
— Rolling Stone