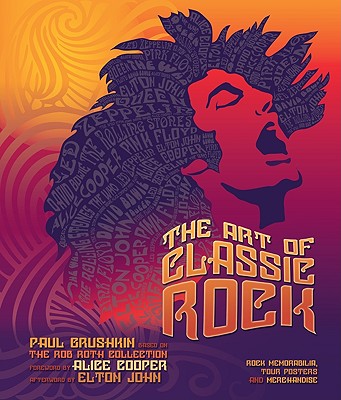 By Paul Grushkin, Elton John
$60.00
Out of Print - Contact us to order used copies.

The ultimate collection of tour posters, memorabilia, and merchandise from the greatest classic rock bands of all time: The Art of Classic Rock is unlike anything else on the market, and a must-have for anybody serious about rock and roll. A foreword by Alice Cooper and afterword by Elton John kick off this impressive tour through rock’s visual history, and vivid commentary from rock historian Paul Grushkin—author of The Art of Rock, The Art of Modern Rock, and The Official Book of the Deadheads—takes you through years with the Rolling Stones, Pink Floyd, the Who, Led Zeppelin, David Bowie, Queen, and more.

Paul Grushkin, who wrote the text for The Art of Classic Rock, is a widely regarded rock historian. He produced the immense Art of Rock, which became the standard work worldwide on rock posters, as well as co-writing The Art of Modern Rock. He is the co-author, with Joel Selvin, of Treasures of the Hard Rock Cafe, and with Cynthia Bassett and Jonas Grushkin, of Grateful Dead: The Official Book of the Dead Heads. Paul lives in Pinole, CA.