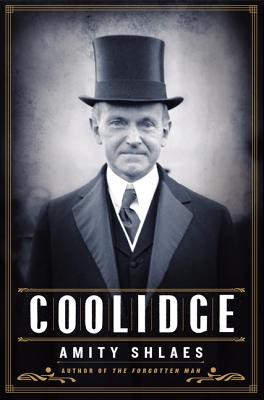 By Amity Shlaes
$35.00
Out of Print - Contact us to order used copies.

Amity Shlaes, author of The Forgotten Man, delivers a brilliant and provocative reexamination of America’s thirtieth president, Calvin Coolidge, and the decade of unparalleled growth that the nation enjoyed under his leadership. In this riveting biography, Shlaes traces Coolidge’s improbable rise from a tiny town in New England to a youth so unpopular he was shut out of college fraternities at Amherst College up through Massachusetts politics. After a divisive period of government excess and corruption, Coolidge restored national trust in Washington and achieved what few other peacetime presidents have: He left office with a federal budget smaller than the one he inherited. A man of calm discipline, he lived by example, renting half of a two-family house for his entire political career rather than compromise his political work by taking on debt. Renowned as a throwback, Coolidge was in fact strikingly modern—an advocate of women’s suffrage and a radio pioneer. At once a revision of man and economics, Coolidge gestures to the country we once were and reminds us of qualities we had forgotten and can use today.

Amity Shlaes is the author of four New York Times bestsellers: The Forgotten Man: A New History of the Great Depression, The Forgotten Man/Graphic, Coolidge, and The Greedy Hand: How Taxes Drive Americans Crazy.

Miss Shlaes chairs the board of the Calvin Coolidge Presidential Foundation and the Manhattan Institute's Hayek Book Prize, and serves as a scholar at the King's College. A former member of the Wall Street Journal's editorial board, Miss Shlaes published a weekly syndicated column for more than a decade, appearing first in the Financial Times, then in Bloomberg.

“History has paid little attention to the achievements of Coolidge because he seemed to be unduly passive. Yet Amity Shlaes, as his biographer, exposes the heroic nature of the man and brings to life one of the most vibrant periods in American economic history.”
— Alan Greenspan

“To read Amity Shlaes’s well-crafted biography is to understand why Reagan so admired the famously reticent man whom Shlaes calls ‘our great refrainer.’”
— George F. Will

“Amity Shlaes’s extraordinary biography describes how a single politician can change an entire political culture -- a story with plenty of echoes today. Alice Roosevelt Longworth, doyenne of the Washington salons, first disdained Coolidge, then admired him. After reading Coolidge, every reader will, too.”
— Anne Applebaum

“A marvelous book that is in many respects as subtle and powerful as Coolidge himself. Shlaes’s masterly command of economics, policy, and personal portraiture illustrates the times, talents, character, and courage of the consummate New Englander.”
— Mark Helprin

“Coolidge is a welcome new biography of a great American president. Amity Shlaes shines fresh light on a leader of humble persistence who unexpectedly found himself in the presidency and whose faith in the American people helped restore prosperity during a period of great turmoil. Amidst today’s economic hardships and an uncertain future, Shlaes illuminates a path forward -- making Coolidge a must-read for policymakers and citizens alike.”
— Paul Ryan

“Timely and important. . . . The research is exhaustive, and the political and economic analysis sound.”
— The Wall Street Journal

“With a deft finger on today’s conservative pulse, Shlaes portrays Calvin Coolidge as a paragon of a president by virtue of his small-government policies.”
— The New York Times Book Review -- Editor's Choice

“Amity Shlaes’s rich new biography reminds us that Calvin Coolidge must not be forgotten in our era of staggering government deficits and poisoned political rhetoric. . . . A finely muted drama.”
— USA Today

“America’s 30th president has been much misunderstood. . . . Shlaes’s biography provides a window onto an unfairly tarnished period. It deserves to be widely read.”
— The Economist

“Shlaes impresses readers with the single-mindedness of Coolidge’s pursuit. . . . For the next decade or so, it may be Amity Shlaes who has custody of Coolidge’s reputation.”
— Thomas Mallon, The New Yorker

“Amity Shlaes’s new biography ushers in a long-overdue rehabilitation of the 30th president. . . . Coolidge is a compelling, endlessly rewarding, and persuasive contribution to historical scholarship.”
— The Weekly Standard