The Cup and the Crown (Silver Bowl #2) (Hardcover) 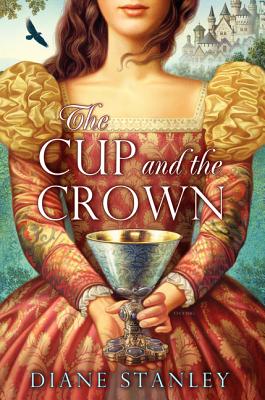 This is book number 2 in the Silver Bowl series.

Readers who love the adventure in Megan Whalen Turner’s Newbery Honor novel The Thief will be captivated by Molly’s dangerous magical quest in this thrilling sequel to Diane Stanley’s novel The Silver Bowl.

Night after night, Molly has visions of a beautiful goblet: one of her grandfather’s loving cups, which he filled with magic that bound people together. So it hardly surprises Molly when handsome King Alaric asks her to find a loving cup to help him win the heart of the beautiful Princess of Cortova.

As Molly and her friends Winifred and Tobias journey in search of a loving cup, a mysterious raven joins their quest and appears to guide them all the way to the hidden city of Harrowsgode. There, Molly discovers secrets about her own family as well as the magic of the loving cup. But Harrowsgode is hidden for a reason, and leaving is more difficult than Molly imagined. Will she be able to escape, let alone bring a loving cup to King Alaric?

Diane Stanley is the author and illustrator of beloved books for young readers, including The Silver Bowl, which received three starred reviews, was named a best book of the year by Kirkus Reviews and Book Links Lasting Connections, and was an ALA Booklist Editors' Choice; The Cup and the Crown; Saving Sky, winner of the Arab American Museum's Arab American Book Award and a Bank Street College of Education Best Book of the Year; Bella at Midnight, a School Library Journal Best Book of the Year and an ALA Booklist Editors' Choice; The Mysterious Case of the Allbright Academy; The Mysterious Matter of I. M. Fine; and A Time Apart. Well known as the author and illustrator of award-winning picture-book biographies, she is the recipient of the Orbis Pictus Award for Outstanding Nonfiction for Children and the Washington Post-Children's Book Guild Nonfiction Award for her body of work.

“Richly imagined and elegantly conveyed, this is a worthy successor to Molly’s star-studded debut.”
— Kirkus Reviews

“A story to be cherished and read again and again.”
— School Library Journal

“It is the suspense of the plot that propels the reader through the story, but Stanley enriches that suspense with humor, strong sensory details, and an intelligent, engaging heroine.”
— The Horn Book

“The setting remains strong, and Molly and her best friend Tobias continue to be thoroughly engaging characters. An open ending promises a third volume of Molly’s adventures, which will surely delight Stanley fans.”
— Booklist

Praise for The Silver Bowl: “Veteran Stanley concocts a delicious blend of familiar fairy-tale motifs and intriguing, well-rounded characters to create an engaging fantasy. A most worthy and enjoyable entry in the ‘feisty female’ fantasy genre.”
— Kirkus Reviews (starred review)

Praise for The Silver Bowl: “[T]he pacing is masterful, with new information and character development doled out in exactly the right doses, intercut with thrilling escapes and clever plots...a satisfying yarn of loyalty rewarded and mutual understanding gained.”
— Bulletin of the Center for Children’s Books

Praise for Saving Sky: “The main characters are well rendered and likable, and, in her portrayal of the earth-centered, nurturing Brightman family, Stanley succeeds in delivering the message that hope trumps fear.”
— School Library Journal

Praise for Saving Sky: “This page-turner skillfully captures the irrational fear of a public under siege while giving kids a modern-day, almost-just-like-them female hero who champions hope. Inspiring.”
— Kirkus Reviews

Praise for Bella at Midnight: “Once begun, it will be hard to put down.”
— Kirkus Reviews (starred review)

Praise for Bella at Midnight: “More than a reworking of the familiar, this is a 21st-century fairy-tale, throughly enjoyable in its own right.”
— School Library Journal (starred review)

Praise for Bella at Midnight: “Stanley subtly twists strands of the Cinderella story until it’s something quite new and fine.”
— Booklist (starred review)

Praise for Bella at Midnight: “Fans of fairy tale retellings will enjoy the fanciful twists in familiar territory, and long remember this engaging heroine, destined for a happily-ever-after life.”
— Voice of Youth Advocates (VOYA)