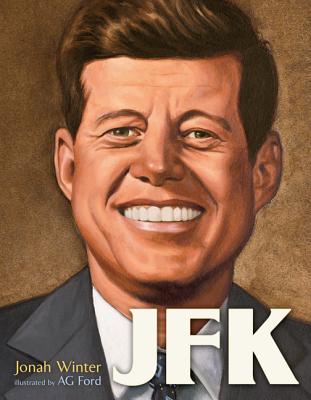 The New York Times bestselling team that brought readers Barack in 2008 presents this picture book biography of John F. Kennedy, the 35th president of the United States of America. JFK tells how a little boy grew up to be president in a story about hope and courage and the power of words. It details JFK's childhood as well as his presidency and includes the Cuban missile crisis, the civil rights movement, the Camelot years, and a firsthand account of his assassination. This nonfiction picture book is an excellent choice to share during homeschooling, in particular for children ages 4 to 6. It’s a fun way to learn to read and as a supplement for activity books for children.

JFK's is a story that has been told by many voices. Acclaimed picture book biographer Jonah Winter offers his own voice and memories about JFK and his significance in this heartfelt personal profile, illustrated in vibrant detail by award-winning artist AG Ford.

Jonah Winter grew up in Dallas, Texas, and saw JFK on November 22, 1963, moments before he was assassinated. Mr. Winter is the author of many celebrated biographies for young readers, including the New York Times bestselling Barack, also illustrated by AG Ford; You Never Heard of Sandy Koufax?!; Dizzy; and Frida.

AG Ford is the illustrator of the New York Times bestselling Barack by Jonah Winter and also of Michelle and First Family by Deborah Hopkinson. He is the recipient of an NAACP Image Award.

An appealing introduction to the Kennedy legend.
— School Library Journal

At every turn, Winter successfully turns his own admiration for JFK into a new profile of courage.
— San Francisco Chronicle Book Review